26 November 2012
A United Nations independent expert today urged the Sudanese Government to boost its efforts to find durable solutions to the needs of internally displaced persons (IDPs) in all regions of the country.

“A key step in this direction is addressing the very dire situation of IDPs in terms of safety, and their basic rights to adequate food, shelter, health, education, water, and livelihoods,” said the Special Rapporteur on the human rights of internally displaced persons, Chaloka Beyani, at the end of his nine-day mission to Sudan, which ended on Thursday.

“Concerted efforts are needed in order to meet these and other assistance and protection needs of IDPs, to create an enabling environment in which to achieve new political solutions, and put in place practical measures to ensure the implementation of agreements that have already been signed,” he added.

According to the Office of the UN High Commissioner for Refugees (UNHCR), there are some 2.4 million IDPs in Sudan who have been displaced by violence in various parts of the country, including the Darfur region and the states of Blue Nile and South Kordofan.

Mr. Beyani stressed that some of the key challenges concerning IDPS include the timely and effective implementation of relevant agreements, improving security, access to services and justice, and respect for human rights. He added that the support of the international community would be key to implementing reforms that promote the meaningful participation of IDP communities, including vulnerable persons and women.

“I urge the Government of Sudan to adopt a comprehensive approach to durable solutions, which facilitates voluntary returns as well as local integration and resettlement,” the Special Rapporteur "said. “I also encourage the Government and the international community to integrate displacement-affected communities into urban planning, development, and livelihood projects.”

During his visit, Mr. Beyani met with relevant Government officials, the Darfur regional authority, human rights organizations, members of civil society, traditional leaders and UN officials. He also met with communities affected by internal displacement in North, West and South Darfur, in and around Khartoum, the capital, and at departure points for persons of South Sudanese origin.

Regarding persons of South Sudanese origin, Mr. Beyani urged Sudanese authorities to promote a culture of respect for human rights to prevent cases of harassment or human rights violations against them. He also encouraged them to facilitate safe voluntary returns by establishing humanitarian corridors in cooperation with the South Sudanese Government.

South Sudan seceded from Sudan in July last year after voting overwhelmingly for separation in a referendum held as part of the 2005 Comprehensive Peace Agreement that ended the decades of civil war.

Independent experts, or special rapporteurs like Mr. Beyani, are appointed in an honorary capacity by the Geneva-based UN Human Rights Council to examine and report back on a country situation or a specific human rights theme. He is scheduled to present his full report on his visit to Sudan to the Council in June 2013. 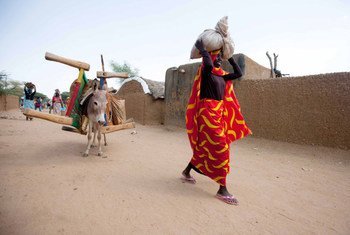 30 August 2012
About 80 percent of the residents of a camp for internally displaced persons (IDPs) in North Darfur, Sudan, have returned to the camp, in the aftermath of the recent violence which displaced 25,000 IDPs, the United Nations-African Union peacekeeping mission in Darfur, known by the acronym UNAMID, reported today.