21 November 2012
As countries prepare to meet next week at a major United Nations meeting on climate change, the world body today released a new report which finds that the concentration of warming gases like carbon dioxide (CO2) has increased by 20 per cent since 2000.

As countries prepare to meet next week at a major United Nations meeting on climate change, the world body today released a new report which finds that the concentration of warming gases like carbon dioxide (CO2) has increased by 20 per cent since 2000.

The Emissions Gap Report, coordinated by the UN Environment Programme (UNEP) and the European Climate Foundation, also shows that greenhouse gas emissions levels are now around 14 per cent above where they need to be in 2020.

“If no swift action is taken by nations, emissions are likely to be at 58 gigatonnes (Gt) in eight years’ time,” states the report, which has involved 55 scientists from more than 20 countries.

Previous assessment reports have underlined that emissions need to be on average at around 44 Gt or less in 2020 to lay the path for the even bigger reductions needed at a cost that is manageable.

Action on climate change needs to be scaled-up and accelerated without delay if the world is to have a running chance of keeping a global average temperature rise below two degrees Celsius this century, the report notes.

“There are two realities encapsulated in this report – that bridging the gap remains doable with existing technologies and policies; that there are many inspiring actions taking place at the national level on energy efficiency in buildings, investing in forests to avoid emissions linked with deforestation and new vehicle emissions standards alongside a remarkable growth in investment in new renewable energies worldwide, which in 2011 totalled close to $260 billion,”  said UNEP’s Executive Director, Achim Steiner.

“Yet the sobering fact remains that a transition to a low-carbon, inclusive green economy is happening far too slowly and the opportunity for meeting the 44 Gt target is narrowing annually,” he added.

The report estimates that large emission reductions are possible from sectors such as power generation, transport and forestry, as well as boosting the energy efficiency of buildings, which could help bridge the gap by 2020, in addition to providing examples of policies in each sector that countries can implement at a national level.

Greenhouse gases will feature prominently on the agenda of the UN Climate Change Conference beginning on Monday in the Qatar capital of Doha, and which brings together the 195 Parties to the UN Framework Convention on Climate Change (UNFCCC), the parent treaty of the 1997 Kyoto Protocol.

“Governments meeting in Doha for COP18 now need to urgently implement existing decisions which will allow for a swifter transition towards a low-carbon and resilient world,” said the Executive Secretary of the UNFCCC, Christiana Figueres.

“This notably means amending the Kyoto Protocol, developing a clear vision of how greenhouse gases can be curbed globally before and after 2020, and completing the institutions required to help developing countries green their economies and adapt,” she added, “along with defining how the long-term climate finance that developing countries need can be mobilized. In addition, governments need to urgently identify how ambition can be raised.”

The Kyoto Protocol has been ratified by 193 of the UNFCCC Parties. Under the Protocol, 37 States, consisting of highly industrialized countries and countries undergoing the process of transition to a market economy, have legally binding emission limitation and reduction commitments. 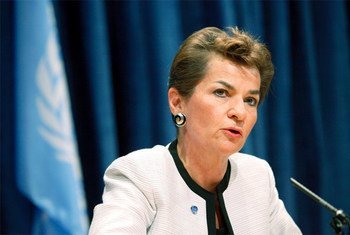