“The investment in Bangkok has paid off. Government negotiators have pushed forward key issues further than many had expected and raised the prospects for a next successful step in Doha,” said the Executive Secretary of the UN Framework Convention on Climate Change (UNFCCC), Christiana Figueres.

“There are still some tough political decisions ahead, but we now have a positive momentum and a greater sense of convergence that will stimulate higher-level political discussions ahead of Doha and set a faster pace of work once this year’s conference begins,” she added.

During the previous UNFCCC conference, in Durban, South Africa, 194 parties to the UNFCCC agreed on a package of decisions – known as the Durban Platform – which include the launch of a protocol or legal instrument that would apply to all members, a second commitment period for the existing Kyoto Protocol, which legally binds developed countries to emission reduction targets, and the launch of the Green Climate Fund, which was created to help developing nations protect themselves from climate impacts and build their own sustainable futures.

Nations also set specific objectives for the meeting in Doha, which will take place from 26 November to 7 December. These objectives include triggering a new phase of climate action and filling in the gaps in the international policy response to climate change.

According to UNFCCC, the Bangkok climate talks began to address these objectives, and produced a document outlining what needs to be done to resolve differences of opinion among countries.

The talks also made progress in various areas, including plans for a mechanism to boost international cooperation on climate action, financing for the initiative to reduce emissions from deforestation and forest degradation, and identifying points where negotiating groups might need additional decisions in Doha in order to close successfully.

During the Bangkok talks, countries also discussed the necessary steps to negotiate a global climate change agreement that could be adopted in 2015 and enter into force in 2020, as well as ways to raise global ambitions to cut greenhouse gas emissions faster.

There are now 195 Parties to the Convention on Climate Change, which sets an overall framework for intergovernmental efforts to tackle the challenge posed by climate change. The treaty also recognizes that the climate system is a shared resource whose stability can be affected by industrial and other emissions of carbon dioxide and other greenhouse gases. 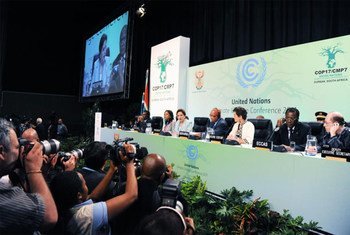 11 December 2011
Secretary-General Ban Ki-moon welcomed today the set of decisions reached by countries at the United Nations Climate Change Conference in Durban, South Africa, saying they represent a significant agreement that will define how the international community will address climate change in the coming years.