The 74th anniversary of the Kristallnacht – the violent attack in Germany and Austria against Jews and their homes, synagogues and businesses in 1938 – was observed at United Nations Headquarters this week with two discussions involving renowned experts on some of the issues related to the pogrom.

Organized by the Holocaust and UN Outreach Programme of the world body's Department of Public Information (DPI), the discussions commemorated the events of 9-10 November 1938, also known as the 'night of broken glass,' which signalled an escalation in violence towards Jews, ultimately leading to their mass murder during the Holocaust.

On Wednesday, a roundtable discussion entitled 'The Holocaust by Bullets: Uncovering the Reality of Genocide,' examined the work done by Patrick Desbois, a French Catholic priest who has dedicated many years of his life investigating the truth about mass shootings that took place during the Holocaust. His latest research focuses on the fate of the Roma during World War II.

Mr. Desbois also founded Yahad-In Unum, a research organization uncovering the mass executions of Jewish and Roma people in Eastern Europe between 1941 and 1944. The organization has identified over 800 extermination sites during the Holocaust so far, and recorded the testimony of more than 3,000 eyewitnesses to these crimes.

“I commend Father Desbois and Yahad-In Unum for their tireless efforts to recover the dignity of the Jewish and Roma victims of this brutality,” the Under-Secretary-General for Communications and Public Information and head of DPI, Peter Launsky-Tieffenthal, told the discussion participants in his opening remarks.

“By identifying their unmarked mass graves, you have set history on its proper course. No longer will these mothers, fathers and children remain forgotten,” he added. “No longer silent, their bodies will remain testimony to the truth.”

The event also covered global efforts to prevent genocide today. “My goal is to give back to families, Jewish communities, and to fight against Holocaust deniers,” Father Desbois told the attendees.

Other speakers at Wednesday's event included Gillian Kitley, a senior political affairs officer in the UN Office on Genocide Prevention and the Responsibility to Protect. The Deputy Permanent Representative of France to the UN, Ambassador Martin Briens, also delivered a statement.

On Thursday, a discussion on the history of the Holocaust in the former Soviet Union during World War II, and Holocaust education in Russia today, took place with the participation of renowned historian Ilya Altman, who also co-founded the Russian Research and Educational Holocaust Centre in Moscow.

In the discussion, entitled 'From Forgotten Memory to Nascent Remembrance: Holocaust History and Education in Russia Today,' Mr. Altman and other historians examined how education and the preservation of memory of this event serve as vital links to prevent genocide in the future.

Russia's Deputy Permanent Representative to the UN, Sergey N. Karev, made an opening statement at the discussion, which also touched on efforts to counter Holocaust denial and recent attempts to glorify Nazi ideology.

“Today the United Nations Holocaust Programme is working – through educational materials, commemorative events, film screenings and other initiatives – to encourage Holocaust education and remembrance to help prevent genocide and mass atrocities,” DPI's Deputy Director of Partnerships and Public Engagement, Ramu Damodaran, who moderated the Thursday event, told attendees. “Education is an essential tool in defending and promoting human rights, and in combating violence and other atrocities.”

The activities of the events' organizer, the Holocaust and the United Nations Outreach Programme, include producing online and print educational materials, holding seminars and exhibitions, screening films and the holding the annual worldwide observance of the International Day of Commemoration in Memory of the Victims of the Holocaust on 27 January each year.

Life and death of children in the Holocaust remembered at UN 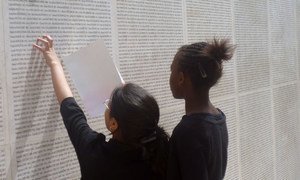 UNESCO study to examine treatment of Holocaust in global curricula

A new United Nations study exploring the ways schools around the world address the subject of the Holocaust and which ones are doing so is now underway, the United Nations Educational, Scientific and Cultural Organization (UNESCO) announced today.