WFP/Abeer Etefa
Ertharin Cousin talks with Syrian refugee women in a kitchen set up by WFP at the Zaatari refugee camp in Jordan.

9 November 2012
The head of the United Nations food relief agency today said the world body and its partners are intensifying their efforts to assist Syrian refugees who continue to grow in numbers due to the violence in the Middle Eastern country.

“The humanitarian situation is evolving on a daily basis and we must ensure that we can continue to meet the food needs of those affected by the conflict,” said Ertharin Cousin, the Executive Director of the UN World Food Programme (WFP), during a visit to the Zaatari refugee camp in Jordan.

“Together with our UN and NGO [non-governmental organization] partners, we are strengthening our response capacity to address any escalation in need should the situation further deteriorate leading to more displacement from Syria.”

Syria has been wracked by violence, with at least 20,000 people, mostly civilians, killed since the uprising against President Bashar al-Assad began some 20 months ago. The violence has spawned more than 380,000 refugees – many of them seeking safety and aid in neighbouring countries – with more than 2.5 million people in need of humanitarian assistance, according to UN estimates.

During her visit to the camp, Ms. Cousin met with Syrian women, who told her about fleeing their homes and taking cover at night until they reached safety in Jordan. Many of them had travelled for two days without any food until they arrived at Zaatari camp, which hosts tens of thousands of refugees.

“We recognize the difficult living conditions that Syrian refugees are facing away from home and we are committed to working together with our NGO partners and sister UN agencies to improve these conditions,” Ms. Cousin told journalists during a news conference in the camp.

Her visit to Zaatari camp was the last stop of a three-day trip to Lebanon and Jordan to see the increasing humanitarian needs of Syrian refugees in neighbouring countries. The trip was also her first official visit to the region since she assumed her post as head of WFP in April.

WFP has launched a regional emergency operation to cover the food needs of Syrians who have fled to Iraq, Jordan, Lebanon and Turkey, and is seeking to reach as many as 460,000 people by the end of the year.

In Jordan, the agency provides ready-to-eat food to Syrians arriving at Zaatari camp, and, once they have settled in, supplies them with dry food rations to cook in communal kitchens. In addition, WFP provides food vouchers to Syrian refugees living with host communities so they can buy food in shops and at the same time boost the local economy.

Before her visit to the camp, Ms. Cousin met top Jordanian officials and expressed gratitude for the generosity of the Jordanian people and the Government for welcoming displaced Syrians and extending support to people fleeing violence. 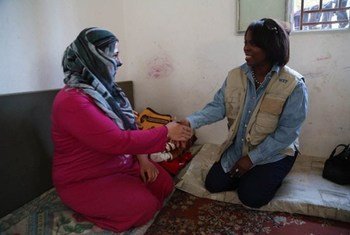 7 November 2012
The head of the United Nations food relief agency today expressed her thanks to the people and Government of Lebanon for their support of Syrians seeking refuge from the violence affecting their country.