UN Photo/Rick Bajornas
Secretary-General Ban Ki-moon (second right) and General Assembly President Vuk Jeremic (right) observing a moment of silence at the start of a briefing to the Assembly on the impact of Hurricane Sandy.

9 November 2012
In a briefing to the General Assembly, United Nations Secretary-General Ban Ki-moon today highlighted the world body’s challenges, responses and lessons learned from Hurricane Sandy, while also reiterating his call for more action in regard to climate change.

“Storms and emergencies pose great tests and challenge. They may bring out the best in people who work beyond the call of duty in trying and even heroic circumstances,” Mr. Ban said. “But emergency situations can also lay bare where we may have been operating on flawed assumptions and must do better.”

“Such was the case over the past two weeks. The United Nations continued to provide its vital global services despite major disruptions,” he added. “At the same time, where there were mistakes – there must be lessons. We are determined to work with all of you to learn and move forward.”

The Assembly’s informal meeting was convened by that body’s President, Vuk Jeremic, to address issues that arose in the wake of the storm. At today’s briefing, in addition to expressing condolences on behalf of the General Assembly to all those who lost loved ones due to the storm, Mr. Jeremic also called for a minute of silence to pay respect to its victims.

Beginning in late October in the Atlantic Ocean, Hurricane Sandy grew into what some media reports described as a “once in a generation” storm, causing death and destruction across the Caribbean region and the eastern seaboard of the United States.

In the Caribbean, five million people were affected and 72 people died. In Haiti, 54 people died, and hundreds of thousands of people were hit by floods and heavy winds. In Cuba, 20 per cent of the country's population was affected. Jamaica, the Dominican Republic and the Bahamas also suffered significantly.

Along the US eastern coastline and the New York metropolitan area, more than 100 people lost their lives and many families are still without power.

In the wake of the hurricane, the UN chief spoke with the Presidents of Cuba, the Dominican Republic and Haiti, as well as the Prime Minister of Jamaica. “I expressed my solidarity to each, and pledged the full support of the United Nations for the recovery effort,” he told the Assembly.

Immediately after the storm, the world body allocated $5 million to Cuba and $4 million for Haiti from the UN Central Emergency Response Fund (CERF). Managed by the UN Office for the Coordination of Humanitarian Affairs (OCHA) and funded by voluntary contributions from Member States, non-governmental organizations and others, CERF enables the fast delivery of life-saving assistance to people affected by natural disasters and other crises worldwide.

In addition, Jamaica is to receive an emergency grant for health and food security support.

“The United Nations is working closely with national authorities, donors and emergency organizations to ensure the strongest possible support for national efforts to see to their needs today and to strengthen disaster risk reduction for the future,” Mr. Ban said.

The Secretary-General has written a condolence letter to US President Barack Obama and spoken with the Governors of the US states of New Jersey and New York, Chris Christie and Andrew Cuomo, respectively, as well as the Mayor of New York City, Michael Bloomberg, and the Chairperson of the American Red Cross, Bonnie McElveen-Hunter.

Hurricane Sandy’s arrival, and its effects, in New York City, where the United Nations is headquartered, led to the world body’s offices being closed for an unprecedented three days straight, with most meetings cancelled, before re-opening on Thursday, 1 November.

The UN complex sustained damage due to high wind and flooding, which affected communications and other infrastructure.

Discussing the impact of the storm on the United Nations, the Secretary-General noted that despite its severity, material damages in the UN Headquarters complex were relatively contained and there were no reports of injuries to staff members and their dependents. However, several staff members suffered damage to property and experienced other difficulties.

The most serious damage experienced at the UN Headquarters complex occurred when flooding in a basement caused the shutdown of a cooling system, which, in turn, caused the shutdown of some elements of its information and communications technology infrastructure. While back-up systems helped provide continuity and no data was lost, some communications systems were severely affected, including both data and telephones.

“Let me also stress that our global services were provided without interruption. Many staff worked around the clock,” Mr. Ban said, while also noting that, “in the broadest sense,” more could have been done to update UN Member States, staff and the wider public about the impact and implications of the storm.

“We are looking closely into what worked and what did not during the response, and are determined to fix whatever went wrong,” he stated. The stock-taking exercise encompasses crisis governance, infrastructure, technology, staff support and communications, both internal and external.

“We expect this effort to generate practical recommendations for strengthening business continuity and filling the gaps that became evident during the crisis,” Mr. Ban added.

In their remarks to the gathering, both the Secretary-General and the General Assembly President raised the issue of climate change.

“Extreme weather events caused by global warming are but one manifestation of the reality of climate change. This is a very serious issue that requires us to work much more closely together in order for it to be adequately addressed,” President Jeremic said, in addition to expressing his belief that the Secretary-General and his team deserve the Assembly’s “full support as they work hard to overcome the ongoing difficulties.”

The Secretary-General, in his speech, acknowledged the difficulties in attributing any single storm to climate change, adding, “But we also know this: extreme weather due to climate change is the new normal.”

“This may be an uncomfortable truth, but it is one we ignore at our peril. The world’s best scientists have been sounding the alarm for many years,” he said. “Our own eyes can see what is happening. There can be no looking away, no persisting with business as usual, no hoping the threat will diminish or disappear.”

The UN chief said the challenge before the international community remains clear and urgent: a reduction in greenhouse gas emissions, strengthening for adaptation to the even larger climate shocks expected in the future, and to reach a legally binding climate agreement by 2015.

“This is an opportunity, not just a burden. It is a chance to steer the world on a more sustainable path – creating the jobs and energy systems and other foundations for long-term prosperity and stability for all,” Mr. Ban said.

“This should be one of the main lessons of Hurricane Sandy,” he added. “Let us make this wise investment in our common future.” 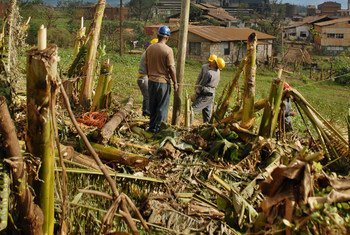 UN-sponsored aid arrives in Cuba in wake of Hurricane Sandy