FAO/J. Spanner
A woman is seen here food shopping at the market.

The UN Food and Agriculture Organization’s (FAO) Food Price Index dropped one per cent from September. The decline from 215 to 213 points was largely due to lower international prices of cereals and oils and fats, the agency said in a news release.

The Index measures the monthly change in international prices of a basket of 55 food commodities, including meat, dairy, sugar, and cereals. The prices for cereals also increased slightly, while sugar and oils prices fell.

Lower international prices and freight rates this year, along with lower cereal purchases, are also expected to push down the total costs of world imports this year. FAO’s Food Outlook global market report, also published today, estimates that the global expenditure on food imports will stand at $1.14 trillion in 2012, 10 per cent lower than last year.

“Despite tight markets, a set of conditions and measures have so far stopped international food prices from spiralling up as they did in 2007-2008 and 2009-2010,” said FAO Director-General José Graziano da Silva. He added that policies such as those put in place by the Group of 20’s Agricultural Market Information System (AMIS) have helped prevent panic and “stop the worst drought in decades [from] turning into a food price crisis as has happened in the past.”

According to its website, the AMIS initiative seeks to enhance food market transparency and encourage coordination of policy action in response to market uncertainty, mainly focusing on four foods that are particularly important in international markets: wheat, maize, rice and soybeans. AMIS has its Secretariat at FAO Headquarters in Rome, Italy.

“Droughts or floods are not what cause crises, it is lack of governance,” Mr. Graziano da Silva said. “In a globalized world, we cannot have food security in only one country or in one region. We need to strengthen the global governance of food security.”

The Food Outlook, which is published biannually, also warns that cereal production is forecast to fall by 2.7 per cent, leading to a 25 million ton contraction in world stocks. Meanwhile, rice production this year may surpass last season’s record, which is mainly due to favourable growing conditions.

World sugar production is also forecast to reach a new record as large export availabilities in key supplying countries, along with a rebuilding of sugar inventories in major importing countries, are expected to boost trade in the 2012- 2013 season.

Meat prices remained unchanged, FAO said, while dairy prices experienced a 3 per cent increase over the past month due to low stocks and an increasing demand. The agency said milk prices in particular, could increase further because of lack of substantial growth in output in the main exporting countries. 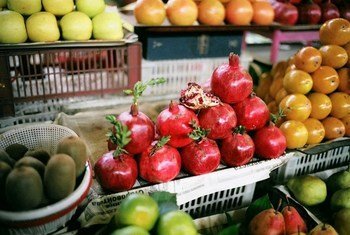 4 October 2012
The United Nations today reported that global food prices slightly increased in September after two months of stability, and warned that despite increased cereal production in low income countries, global harvest of this commodity is expected to decrease this year.