4 October 2012
The United Nations today reported that global food prices slightly increased in September after two months of stability, and warned that despite increased cereal production in low income countries, global harvest of this commodity is expected to decrease this year.

During September, the UN Food and Agriculture Organization’s (FAO) Food Price Index rose by 1.4 per cent from its level in August. The rise to 216 points from 213 primarily reflects the strengthening of dairy and meat prices, the agency said in a news release.

The Index measures the monthly change in international prices of a basket of 55 food commodities, including meat, dairy, sugar, and cereals. The prices for cereals also increased slightly, while sugar an oils prices fell.

Meat prices averaged 175 points in September, up 2.1 per cent from August. Pig and poultry sectors recorded particularly strong gains, increasing by 6 per cent and 2 per cent, respectively.

Dairy prices experienced a seven per cent increase from August, representing the sharpest monthly increase since January 2011. The rise, FAO said, was partly due to the firm demand for milk products, which combined with increasing feed costs, is underpinning world prices.

This 2.6 per cent decrease is expected to result in a significant reduction in world cereal stocks by the close of seasons in 2013, with production being affected by drought in key producing areas such as the United States, Europe and Central Asia.

In spite of this global decrease, FAO estimates that cereal production will significantly increase in Low-Income Food-Deficit countries (LIFDCs). In its Crop Prospects and Food Situation report, also published today, the agency forecasts that the aggregate cereal production for these countries will reach a record level of 534 million tons, up 1.7 per cent from last year’s harvest.

Current high prices however, will mean added budgetary pressures for countries that import this commodity, such as Morocco, where wheat production declined because of unfavourable weather conditions, making the sub-region highly dependent on imports.

In West Africa, in spite of favourable harvest prospects, the food security situation in the Sahel is still of concern, with close to 19 million people in need of continued assistance largely due to the lingering effects of last year’s poor harvests. A desert locust threat also remains a serious concern.

The report, which focuses on 35 countries that are affected by food insecurity, also warns about civil unrest in Syria and Yemen, which has led to 1.5 million and 10 million to people to require food assistance. 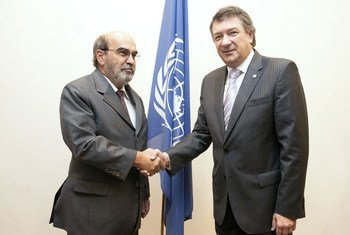 14 September 2012
Argentina’s announcement that it would export an additional 2.75 million tonnes of maize this year will help ease tight international markets, the United Nations food agency said today, adding that while this is a welcome measure, countries must remain vigilante to avoid a global food crisis.