UN Photo/Iason Foounten
Secretary-General Ban Ki-moon on a visit to Libya in November 2011.

22 October 2012
United Nations Secretary-General is alarmed by the fighting in and around the Libyan city of Bani Walid, and in particular the reports indicating growing civilian casualties due to indiscriminate shelling, according to his spokesperson.

“The Secretary-General reminds all parties of their obligations under international humanitarian law and calls on all the Libyan authorities and those in Bani Walid to begin immediately a process to resolve the Bani Walid stand-off peacefully,” the spokesperson added in a statement issued on Sunday evening.

According to media reports, Libyan army forces have launched a full-scale assault against the town, accusing it of being controlled by supporters of the former dictator Muammar al-Qadhafi, who was overthrown in 2011 after decades of autocratic rule.

The small city was one of the last to fall to rebels groups during last year’s conflict, and some are said to consider it a shelter for regime loyalists and criminal gangs. Fierce fighting has reportedly raged in the town over recent days.

In his statement, Mr. Ban’s spokesperson said the UN chief firmly believes that the Libyan authorities must be able to extend Libyan sovereignty and state control and services throughout the territory of Libya.

He pointed to the North African nation’s July elections as an example of when the Libyan people put their trust in the Libyan state, and “urges all Libyans to work together to strengthen the legitimacy and effectiveness of state institutions across the country.”

“The state and those militias acting in its name also have a responsibility to the people of Libya to act fully in accordance with international law, in particular international human rights law,” the spokesperson said. “All those involved in the fighting in and around Bani Walid should be aware that the international community is closely monitoring the situation.”

Incidents of renewed fighting in various parts of the country are among the security challenges facing the North African nation, which also needs to prepare a new constitution, promote rule of law, protect human rights, and counter illicit arms proliferation.

The UN Support Mission in Libya (UNSMIL) has been assisting the country’s transition toward a modern democratic State, after the toppling of the long-standing al-Qadhafi regime.

“The Secretary-General believes that the situation in Bani Walid can be resolved in a peaceful manner that preserves the rights of all Libyan citizens and permits the state to exercise its responsibilities there,” Mr. Ban’s spokesperson added. “The Secretary-General notes that his Special Representative in Libya is actively engaged in helping to defuse and resolve the Bani Walid stand-off.”

Over the past weekend, the Secretary-General’s Special Representative and head of UNSMIL, Tarek Mitri, voiced concern about unfolding military developments in Bani Walid and urged a mediated settlement in the interests of national reconciliation and long-term stability of the country. 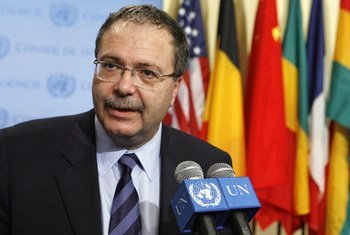 20 October 2012
While expressing praise for the “huge efforts” made by Libya’s leadership and others to bring a halt to violence which has plagued the country over recent months, the UN envoy for the North African nation today voiced concern about unfolding military developments in the city of Bani Walid.