20 October 2012
While expressing praise for the “huge efforts” made by Libya’s leadership and others to bring a halt to violence which has plagued the country over recent months, the UN envoy for the North African nation today voiced concern about unfolding military developments in the city of Bani Walid.

“In the interests of national reconciliation and long-term stability of the country, a mediated settlement is urgently needed,” the Secretary-General’s Special Representative and head of the UN Support Mission in Libya (UNSMIL), Tarek Mitri, said in a news statement, in regard to events in Bani Walid, located some 170 kilometres south of the capital, Tripoli.

According to media reports, Libyan army forces have launched a full-scale assault against the town, accusing it of being controlled by supporters of the former dictator Muammar al-Qadhafi, who was overthrown in 2011 after decades of autocratic rule.

The small city was one of the last to fall to rebels groups during last year’s conflict, and some are said to consider it a shelter for regime loyalists and criminal gangs. Fierce fighting has reportedly raged in the town for two days.

In addition to his concern over the military developments in Bani Walid, Mr. Mitri also spoke of his concern over growing civilian casualties resulting from reported indiscriminate shelling.

He urged all concerned to abide by international humanitarian principles, noting “their obligations to ensure the protection of civilians and take all necessary measures to avoid the targeting of civilian areas, allow for the evacuation of all wounded, and to provide unimpeded humanitarian access, including provision of food and medical care.”

Furthermore, in light of the publicly stated positions, the United Nations remains fully convinced that a comprehensive peaceful outcome is achievable, the statement noted.

This, it added, includes the right of the State to fully assert its national authority over the city of Bani Walid through the deployment of units from the national army and police; the immediate and unconditional release of all detainees who continue to be held inside Bani Walid; the handover to the judicial authorities of all those wanted on suspicion of having committed crimes, along with guarantees for their security and fair trial; the resumption of all basic services to the city; and, the holding of local elections in due course.”

Mr. Mitri emphasized, according to UNSMIL, the role and responsibility of the State in ensuring the security of all and extending its authority over its territory.

Incidents of renewed fighting in various parts of the country are among the security challenges facing the North African nation, which also needs to prepare a new constitution, promote rule of law, protect human rights, and counter illicit arms proliferation.

UNSMIL has been assisting the country’s transition toward a modern democratic State, after the toppling of the long-standing al-Qadhafi regime.

The UN envoy also praised the “huge efforts exerted by President Mohammad al-Magariaf, the General National Congress, as well as by civil society representatives and reconciliation committees, to prevent an outbreak of armed hostilities, and later, through political means, to put an end to various forms of violence.”

In addition, Mr. Mitri reaffirmed the world body’s readiness and commitment to work closely with all concerned to achieve a peaceful outcome to the violence.

On visit to Ramallah, UN envoy expresses hopes for local polls ahead of elections next year

On visit to Benin, UN humanitarian chief calls for more to help people deal with floods 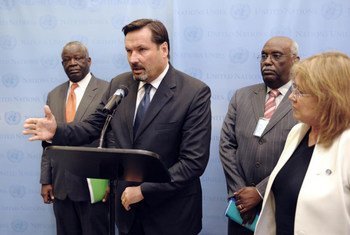 12 October 2012
The United Nations today voiced concern over the impact of recent security developments, including loss of life and injury, amid deadly clashes between armed groups in the Libyan town of Bani Walid.