WFP/Tom Haskell
George McGovern was the first director of the US Food for Peace Programme and was instrumental in the foundation of the World Food Programme in 1963.

22 October 2012
The United Nations food agency today paid tribute to former United States Senator George McGovern who died on Sunday at the age of 90, praising his efforts to combat hunger in his own country as well as abroad.

“Today we have lost a tireless advocate for the world’s hungry,” the UN Food and Agriculture Organization’s (FAO) Director-General José Graziano da Silva, said in a news release.

“His work drafting legislation in his own country to meet the nutritional needs of vulnerable women, infants and children and as a vigorous champion of school lunch programmes, both in the US and around the world, has helped give millions of the world’s poorest children the nutritional foundation needed to succeed in school and life,” he added.

Mr. McGovern, who served in the US Senate from 1963 to 1981, was appointed the first director of the US Food for Peace Programme, created by President John F. Kennedy in 1960, and was instrumental in the foundation of the UN World Food Programme (WFP) in 1963. He also served as the US Ambassador to the UN Agencies for Food and Agriculture from 1998 to 2001.

In 2000, in partnership with former US Senator Bob Dole, he created the George McGovern-Robert Dole International Food for Education and Child Nutrition Program, which commits an annual amount from the US federal budget to provide nutritious meals to poor students around the world.

In 2008, both senators were honoured with the World Food Prize for “their inspired, collaborative leadership that has encouraged a global commitment to school feeding and enhanced school attendance and nutrition for millions of the world’s poorest children, especially girls,” according to prize organizers.

The international prize, which was created in 1986 and is sponsored by a local businessman and philanthropist in the US state of Iowa, recognizes the achievements of individuals who have advanced human development by improving the quality, quantity or availability of food.

“He will be sorely missed by the FAO community and by our partners in the fight against hunger.” Mr. Graziano da Silva said.

In Iowa last week, in his speech at the latest World Food Prize award ceremony, Secretary-General Ban Ki-moon spoke of the then-ailing Senator McGovern, noting that “we at the United Nations have tremendous admiration for his contributions to the battle against global hunger.” 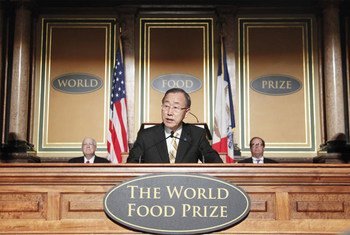 18 October 2012
Innovative approaches and technologies as well as a strong political will from countries are essential to combat hunger, United Nations Secretary-General Ban Ki-moon stressed tonight, at an event honouring the latest winner of the World Food Prize.