UN Photo/Rick Bajornas
Delegates at a meeting of the General Assembly’s Fifth Committee (Administrative and Budgetary), during which delegates were presented with Secretary-General Ban Ki-moon's proposed UN programme budget for 2012-2013. (27 October) 2011

Established in 1945, at the end stages of World War II, it serves as the world body's principal policy-making and deliberative organ, providing a forum for multilateral discussion of the full spectrum of international issues covered by the UN Charter.

The Assembly makes a big splash every year in late September when world leaders descend on a small patch of Manhattan in New York City, home to UN Headquarters, to present their views about pressing world issues, in what is known as the General Debate. Presidents, Prime Ministers, Kings and Queens, Emirs and Foreign Ministers, take centre stage during the General Debate; the UN is in the eyes of the world, and media coverage is at its height over this period.

This year, more than 100 Heads of State or Government and over 70 ministerial-level officials addressed the 67th General Debate, which lasted for six days, and for which the chosen over-arching theme was ‘bringing about adjustment of settlement of international disputes or situations by peaceful means.’

What is less well-known is what happens after the General Debate ends, once world leaders have returned home and the glare of television cameras has ended. New York City was eventually decided upon as the location of UN Headquarters. Here, meeting for the first time in its new permanent home, the General Assembly opens its seventh session in 1952. (14 October 1952) UN Photo

The issues and themes under discussion by the General Assembly lend themselves to more effective discussion in smaller settings covering different topics. So, once the Debate is over, the General Assembly’s six Main Committees select their officers and get down to dealing with the items on the Assembly’s agenda – this year the Assembly has nearly 170 items on it, most of which are carried over from previous years.

Among the new items are some that have to do with funding initiatives such as ‘Financing of the United Nations Supervision Mission in the Syrian Arab Republic,’ proposed by Secretary-General Ban Ki-moon. Other new items on the Assembly’s agenda included ‘Women, disarmament, non-proliferation and arms control’ and ‘Addressing the socioeconomic needs of individuals, families and societies affected by autism spectrum disorders and other developmental disorders.’ 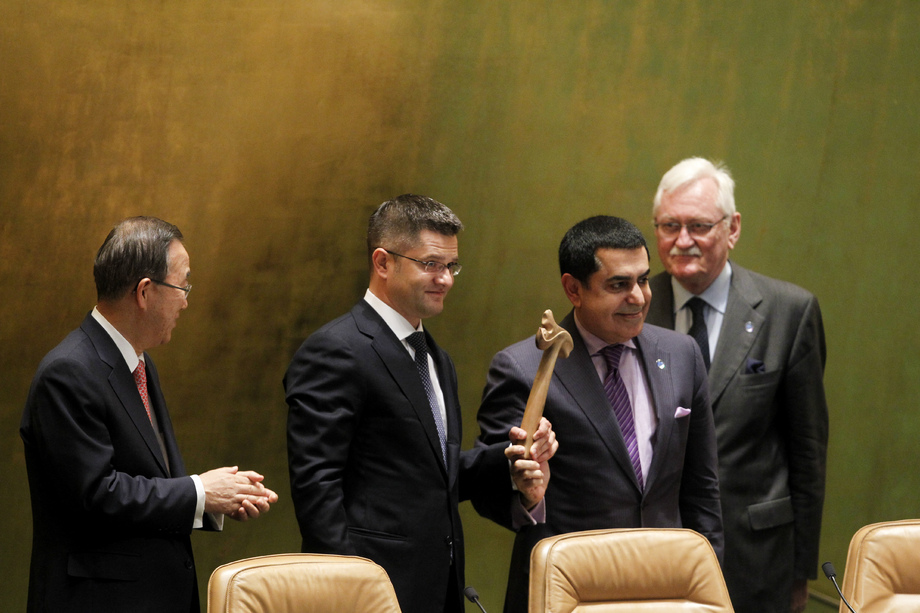 The General Assembly elects a President every year who guides the discussions and presides over the meetings; this session’s President is Vuk Jeremić from Serbia.

Addressing the body in September and describing it as a “grand pantheon of hope for the people’s of the world,” he said, “We must find a way to act in concert, so that the legitimate needs and concerns of Member States can be met.”

All Member States take part in each of the Committees’ discussions and the agenda is divided up thematically. It spans the full range of issues before the UN which are debated and then forward to all UN Member States – in the so-called General Assembly Plenary – for a final decision. The topics touch upon every aspect of human activity. They include: promoting respect for the rule of law, the sovereignty and territorial integrity of UN Member States, sustainable development, democracy and governance, the proliferation of nuclear weapons, arms control, terrorism, equal rights and opportunities for women, human trafficking, the illicit trade in small arms, organized crimes, indigenous people's rights, UN peacekeeping, intercultural dialogue and the need for the revitalization of the United Nations, including reform of the Security Council.

The General Assembly also plays a pivotal role in the development of international law – when a treaty is adopted, it becomes an international legal instrument which has to then be opened for signature and ratification by countries. Hundreds of such treaties have changed the way governments treat their citizens and deal with each other, ranging from piracy to child rights to intellectual copyright law. Wide view of a conference room at UN Headquarters in New York City, at the opening of the General Assembly’s Second Committee (Economic and Financial) discussion of the items on its agenda. (8 October 2012) UN Photo/Rick Bajornas

The Committees do not handle all the issues on the agenda, with certain topics discussed solely by the General Assembly Plenary. Some of these topics include issues like the Question of Palestine and the Secretary-General’s Report on the Work of the Organization.

In his opening address to the General Assembly this year, UN Secretary-General Ban Ki-moon said “I am here to sound the alarm,” as he urged political leaders gathered for the General Debate to overcome divisions before it was too late to effectively address such global challenges as widespread insecurity, deepening inequality, government waste, and the impacts of climate change.

“This is a time of turmoil, transition and transformation — a time when time itself is not on our side,” Mr. Ban said as he provided a snapshot of a world where people were struggling to cope with numerous hardships, from economic inequality to intolerance and fallout from conflict in places such as Syria and Mali.

“They needed ideas, leadership and results now, not in the distant future,” he told the gathered leaders. 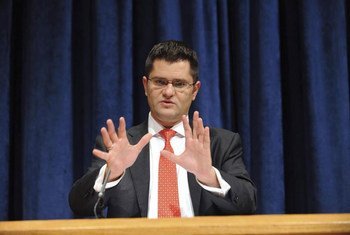 Giving the General Assembly a more prominent role in discussions on global economic governance and strengthening efforts to achieve the peaceful resolution of disputes will be among the priorities for the 67th session, the President of the 193-member body said today.