UNDP
Happy faces after voting in the presidential elections in Yemen.

27 September 2012
Secretary-General Ban Ki-moon today congratulated Yemen for the progress it has made in its democratic transition and called on the international community to support the Middle Eastern nation so it can ‘protect its fragile gains’ and address its humanitarian needs.

“The people of Yemen have embarked on a path of change for their country. Today, the international community has an important opportunity to discuss how it can best help Yemen and its people to move forward towards a better future,” Mr. Ban said at the Friends of Yemen Ministerial Meeting, which took place on the margins of the 67th session of the General Assembly in New York.

Yemen has been undergoing a democratic transition, under the leadership of President Abdrabuh Mansour Hadi Mansour, who came to power in an election in February. This followed the agreement signed by warring factions in November 2011 on a transitional settlement in the wake of widespread protests similar to those seen across the Middle East and North Africa and the resignation of former president Ali Abdullah Saleh.

“One year ago, Yemen was on the brink of civil war. Now, despite the many challenges ahead, Yemen has a new, elected President, a Government of national unity and a framework for economic recovery. Yemenis from all walks of life are gearing up for a vibrant national debate to help shape the future of their country,” Mr. Ban said.

In particular, he praised the President for his work since his election, and reiterated the UN’s readiness to support Yemen in its new phase.

“I would like to commend you, President Hadi, for your efforts to reach out to all Yemenis to restore peace, stability and security, restructure the Yemeni armed forces, and free Yemen from terrorism,” he said. “I expect all Yemenis to work constructively towards achieving these and all other transition goals in full and on time.”

Mr. Ban stressed that to sustain the current pace of progress, it will be necessary to translate the $6.4 billion recently pledged by international donors into tangible results on the ground, especially to address Yemen’s humanitarian needs.

More than 10 million people – almost half the country’s population – are estimated to need food assistance, according to the World Food Programme (WFP). Child malnutrition rates are also among the highest in the world with close to half of its children under five years – two million children – stunted and one million acutely malnourished.

The country is particularly vulnerable to rises in food prices since it imports up to 90 per cent of its main staple foods, including wheat and sugar.

Mr. Ban said he would mobilize the entire UN system to back the President’s efforts to ensure a successful political transition as well as prosperity for all Yemeni people.

“Yemen is making steady progress toward greater stability and development. We must do everything possible to protect the fragile gains,” Mr. Ban said. “The reverberations of Yemen’s transition will be felt beyond the country’s borders. Success will also send important signals to other States facing similar challenges. Let us pledge our commitment to supporting the courageous Yemeni people as they build a more promising future.”

Mr. Ban also had a separate meeting with Mr. Mansour in which they reviewed the situation in Yemen and discussed developments in the wider region. Mr. Ban reiterated the UN’s strong commitment to support Yemen’s democratic transition and expressed concern about all actions aimed at undermining this process. All Yemeni sides should seize the opportunity of the upcoming National Dialogue to agree on tangible reforms that promote peace, stability and prosperity for all Yemeni people, he said. 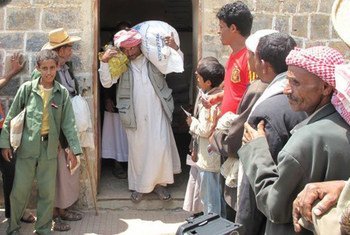 25 September 2012
The United Nations World Food Programme (WFP) is scaling up operations in Yemen, where more than 10 million people – almost half the country’s population – are estimated to need food assistance and the humanitarian situation continues to deteriorate.