27 September 2012
Stressing the need to end the suffering caused by the crisis in eastern Democratic Republic of the Congo (DRC), which has uprooted over 300,000 civilians since earlier this year, Secretary-General Ban Ki-moon today called for an urgent and peaceful resolution based on dialogue.

“There is no military solution to this crisis. We must consider concrete options to bring about a peaceful resolution that is based on enhanced dialogue, deepening integration, and regional confidence-building,” Mr. Ban said in remarks to a high-level meeting on the situation in eastern DRC, convened on the margins of the General Debate of the 67th General Assembly.

“The regional and sub-regional actors most affected are in the best position to help respond to it,” he told the gathering, which included the Presidents of DRC, Rwanda and Zambia, as well as representatives of the International Conference on the Great Lakes Region (ICGLR), the African Union (AU), the Southern African Development Community (SADC) and the European Union.

“But efforts by the ICGLR, SADC and the AU are critical. They also reflect a deepening of the regional integration that, in the long-run, will be the basis on which to prevent new crises from emerging.”

The eastern DRC – particularly its provinces of North Kivu and South Kivu – has been plagued by violence in recent months, particularly by a group called the M23 – made up of renegade soldiers from the country’s national army.

The M23 has clashed with national army troops, which have been supported by peacekeepers from the United Nations Organization Stabilization Mission in the DRC (MONUSCO), and has caused massive displacement of local residents, in addition to raising concerns about the region’s stability.

The violence has also led to what Mr. Ban referred to as an “alarming” humanitarian situation, marked by rape, murder and pillaging. Over 260,000 people have fled the violence since the mutiny began, and an additional 60,000 have fled over the borders into Rwanda and Uganda. Mass rape and other forms of sexual violence continue to be used as weapons of war. Eastern DRC has been called “the most dangerous place in the world to be a woman,” he noted.

“I am deeply disturbed by reports we have confirmed of serious human rights violations by the M23, including the forcible recruitment of hundreds of children who are being used as combatants and sex slaves and, in some instances, killed. These atrocities must be stopped,” said the Secretary-General. “All perpetrators of human rights violations must be brought to justice.”

He noted that insecurity has also increased elsewhere in the Kivus as other armed groups take advantage of the instability. “Many are pursuing economic interests by profiting from eastern DRC’s vast natural resources – resources that could otherwise be used to advance prosperity and growth throughout the Great Lakes region.”

Mr. Ban voiced concern about continuing reports of external support for the M23, and called on all those responsible to end this “destabilizing assistance.”

A proposal for the deployment of a neutral international force along the border between DRC and Rwanda was proposed by Great Lakes countries at a regional summit in July. That proposal is currently under consideration by the UN Department of Peacekeeping Operations (DPKO).

Mr. Ban said that the proposal for the force should be further refined, in coordination with key stakeholders.

In the meantime, he encourage the ICGLR to continue taking forward its Pact on Security, Stability, and Development, which addresses key regional issues such as the exploitation of natural resources, the return of refugees and economic integration.

He added that, in the immediate term, the expanded Joint Verification Mechanism proposed by the ICGLR, which was launched two weeks ago in Goma, has the potential to re-build much-needed confidence.

“What we are witnessing today in eastern DRC has strong echoes of similar events in the recent past,” noted the Secretary-General. “A decade ago, the parties laid down their arms following a conflict that engulfed the DRC and its neighbours. That conflict caused untold human suffering, and the consequences are still being felt today.

Participants at the meeting strongly condemned the M23 and “other negative forces” operating in eastern DRC, and their attacks on civilians, UN peacekeepers and humanitarian actors, and called on them to immediately cease all forms of violence.

“Most participants strongly condemned all forms of external support to the M23 and other negative forces in the DRC, and demanded the immediate and permanent cessation of such support,” added the chairperson’s summary that was issued after the meeting.

In a separate meeting with the President of DRC, Mr. Ban commended Joseph Kabila for his efforts to find a peaceful solution to the situation in the east, according to a readout provided by the Secretary-General’s spokesperson.

He also expressed concern over reports of continued external support to armed groups in eastern DRC and called for continued dialogue and confidence-building between DRC and its Great Lakes neighbours to resolve the ongoing crisis. 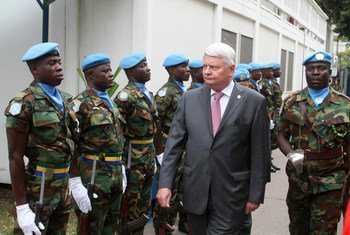 12 September 2012
A proposal for a neutral force to help quell the violence that is causing massive suffering in the eastern Democratic of the Congo (DRC) is under consideration by United Nations peacekeeping operations, according to a top official currently visiting Africa’s Great Lakes region ahead of a high-level meeting on the issue later this month.