UNHCR/S. Malkawi
A Syrian refugee woman holds her child in Jordan's Zaátri camp, where the needs are many.

The Regional Response Plan for Syrian Refugees outlines the plans of 52 humanitarian organizations, led by the UN High Commissioner for Refugees (UNHCR), to assist those fleeing the ongoing crisis.

While an earlier appeal launched in March projected an estimated 100,000 Syrians becoming refugees by the end of 2012, today’s appeal estimates that there may be up to 700,000 Syrian refugees in neighbouring countries by the end of the year, UNHCR said in a news release.

The grave humanitarian crisis in Syria and its impact on neighbouring countries was also among the issues discussed today during a meeting at UN Headquarters in New York between Secretary-General Ban Ki-moon, the Secretary-General of the League of Arab States, Nabil El Araby, and the Joint Special Representative of the UN and the Arab League on the Syrian crisis, Lakhdar Brahimi.

They agreed that donors, including from the Arab League, need to contribute more generously to address the needs of those inside Syria and refugees in neighbouring countries, according to Mr. Ban’s spokesperson.

The three leaders also focused on how to address the appalling violence in Syria and the vital need for the international community to come together to bolster the work of Mr. Brahimi towards an inclusive Syrian-owned political solution that meets the legitimate demands of the Syrian people and leads to a real change.

According to UNHCR, there are currently 294,000 Syrian refugees registered or awaiting registration in neighbouring countries, compared to 41,500 Syrians in March.

“This seven fold increase has brought about a surge in the humanitarian response and a vastly expanded plan of action to respond to the needs of Syrian refugees as well as future arrivals,” stated UNHCR, adding that 2,000-3,000 refugees are crossing daily into neighbouring countries.

“Many refugees are arriving with only the clothes on their backs,” said Panos Moumtzis, UNHCR’s Regional Coordinator for Syrian Refugees. “Some have been displaced many times before leaving Syria. They need humanitarian assistance from day one.”

Mr. Moumtzis said that Jordan, Lebanon, Iraq and Turkey have set the example, keeping their borders open for Syrians fleeing violence. “The neighbouring countries cannot do this alone. The international community must continue to demonstrate solidarity.”

Humanitarian agencies have scaled-up assistance in response to the increase in numbers and needs of refugees, with an increasing sense of urgency to prepare for the winter months, with half the Syrian refugee population living in refugee camps, the majority in tents.

More than 18,000 people, mostly civilians, have died since the uprising against the regime of President Bashar al-Assad began 18 months ago. A further 2.5 million Syrians urgently need humanitarian aid, according to UN estimates.

In addition to the efforts of UNHCR, the World Food Programme (WFP) is supporting the distribution of food to Syrians in camps and among hosting communities in all four neighbouring countries.

WFP is responding to cover the food needs of refugees in Iraq, Jordan, Lebanon and Turkey with food distributions, hot meals and innovative food vouchers.”

The UN Children’s Fund (UNICEF) is working to ensure that all Syrian refugee children are in school, fully immunized and properly clothed for the cold weather that is fast approaching. “UNICEF is ready to provide this support, but what is missing is the funding,” said Maria Cavilis, the agency’s Regional Director for the Middle East and North Africa.

The Regional Response Plan for Syrian Refugees is currently 29 per cent funded, with $141.5 million received to date. 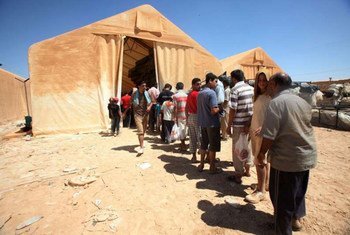 18 September 2012
The Joint Special Representative of the United Nations and the League of Arab States on the Syrian crisis, Lakhdar Brahimi, on Tuesday visited refugee camps in Turkey and Jordan, where he gained first-hand accounts of the struggles facing those who fled the conflict in their homeland.