UN Photo/Marco Castro
President Tomislav Nicolic of Serbia addresses the general debate of the 67th session of the General Assembly.

25 September 2012
While Serbia will never recognize the declared independence of the self-proclaimed Republic of Kosovo, the Balkan nation is willing to hold “direct negotiations” at the highest political level with its authorities in order to help resolve the matter, the President of Serbia, Tomislav Nicolic, today told the General Assembly.

“The Republic of Serbia and myself, as its democratically-elected President, are ready to participate constructively in the negotiating process, because Serbia cannot move forward without Kosovo and Metohija, and the inhabitants of Kosovo and Metohija cannot move forward without Serbia,” President Nicolic said in his statement to the Assembly’s General Debate.

Kosovo declared independence from Serbia in February 2008, but Serbia does not recognize the declaration. The matter has seen tensions between ethnic Serbs and ethnic Albanians flare up over the years, particularly in the north of Kosovo – which has an ethnic Serbian majority, unlike the rest of Kosovo, where ethnic Albanians are the majority – sparking concerns from United Nations officials.

“I am not a prophet, but I must say that the unilaterally declared independence of Kosovo constitutes a dangerous precedent and a long-standing threat to stability in the region of the Western Balkans and beyond it,” President Nicolic noted.

Addressing the Security Council in August, the UN envoy for Kosovo said it was critical to resume the so-called Belgrade-Pristina dialogue between the parties, facilitated by the European Union, which was discussing practical matters and was credited with reducing tensions over border crossings and other issues. The dialogue was suspended due to May general elections in Serbia and the subsequent formation of a new Government.

In his remarks, President Nicolic said that Serbia seeks to have talks with Pristina continue “in good faith and with good intentions,” and noted the importance of Europe’s integration of Serbia, and of the Western Balkans as a whole, in order to ensure progress and stability of the entire region in the long term.

“Serbia has committed itself and will fulfil all obligations undertaken by it as a State in the agreements reached thus far, though I look at them as meeting the wish list of the Albanian party and concessions made by our leadership at that time, under heavy pressure,” he said.

He added, “At the same time, may I be clear: Serbia is not ready and cannot nor will it ever under any circumstances recognize, either explicitly or implicitly, the unilaterally declared independence of its southern province Kosovo and Metohija.”

The Serbian President stated that as a member of the United Nations, Serbia is a “victim of the application of double standards,” noting that the principle of the respect of territorial integrity implies prevention of the promotion of secession, and prevention of efforts aimed at border change in other internationally recognized states.

“For the country I am representing, peace and respect of international law come before all other interests and objectives, whereas political, as well as armed violence, are not nor will they ever become an acceptable means for achieving interest in international affairs,” President Nicolic said.

In his statement, President Nicolic also addressed a range of other matters of global concern, including poverty reduction, renewable energy and climate change.

At General Debate, Georgia calls on UN to help lessen tensions ahead of parliamentary elections 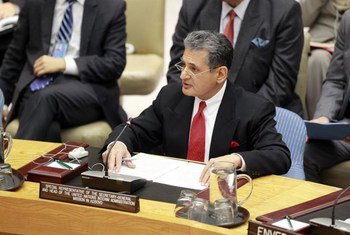