25 September 2012
Switzerland today called on the United Nations to update its processes to better tackle the host of problems besetting the world, from climate change, food security and water scarcity to migration, organised crime, terrorism and weapons proliferation.

“We have to find solutions today for the challenges we will face tomorrow,” the Swiss President, Eveline Widmer-Schlumpf, told the 67th General Assembly at the start of this year’s General Debate. “In view of the growing interdependence between these challenges, we need the UN now more than ever. It must take its place at the heart of international governance.”

The Swiss President is one of scores of heads of State and government and other high-level officials who are presenting their views and comment on issues of individual national and international relevance at the General Debate, which ends on 1 October.

In her statement, she called for more intensive exchanges within the UN, as well as with actors from the worlds of academia, civil society and the private sector to promote creativity and foster broad support for UN activities.

President Widmer-Schlumpf urged Security Council reform, warning that the UN is only capable of acting if it helps to find solutions to conflicts and does not block them.

“The exercising of veto rights in the Security Council in cases of genocide, war crimes or crimes against humanity is difficult to justify,” she stressed, calling on Heads of State and Government at today’s session to support a Swiss-backed initiative to refer Syria to the Hague-based International Criminal Court, which tries those accused of genocide, crimes against humanity and war crimes.

At a meeting in July, Council members were unable to reach agreement on a collective course of action for Syria, where over 18,000 people have been killed since an uprising against the regime of President Bashar Al-Assad erupted 18 months ago. According to UN estimates, some 2.5 million Syrians are in need of humanitarian aid.

In his opening address to the General Debate earlier Tuesday, Secretary-General Ban Ki-moon said that brutal human rights abuses continue to be committed in Syria, mainly by Mr. Assad’s Government, but also by opposition groups.

“There will be no security as long as human rights are being violated in the most serious manner, and as long as those responsible believe that they are safe from prosecution,” President Widmer-Schlumpf said.

She added, “Switzerland therefore demands that those responsible for serious human rights violations be called to account. Impunity is not only immoral. It also hinders the post-conflict reconciliation process in society and encourages history to repeat itself.” 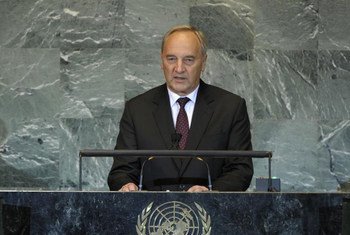 Latvia and Switzerland press the case for UN reform

21 September 2011
The United Nations needs to adapt quickly to new global realities so it can better serve the world’s peoples, starting with the “long overdue” reform of the Security Council, Latvia’s President Andris Berzinš said today.