President Rosen Plevneliev of Bulgaria today announced his country’s intention to seek election to the United Nations Human Rights Council, celebrating the Council as the Organization’s “primary body” for the protection and promotion of human rights.

Speaking at the UN General Assembly in the opening meeting of the General Debate, at UN Headquarters in New York, President Plevneliev underlined his country’s “difficult, dramatic and sometimes turbulent journey” from dictatorship to democratic rule.

“Bulgaria has gone through a successful transition from totalitarian rule to a functioning democracy with an open market economy and a vibrant civil society,” he told the gathered delegates.

“We stand ready to share the experience from our road to democracy with other countries undergoing similar challenges,” he added, noting that Bulgaria was seeking election to the Council for the period 2019 to 2021.

As an indication of Bulgaria’s appreciation of human rights-related issues, Mr. Plevneliev emphasized his country’s “long-standing tradition of tolerance and dialogue” between ethnic and religious communities.

“This tradition can be aptly illustrated by a glimpse of the centre of our capital, where four temples of different religions – Islam, Judaism, Catholic and Orthodox Christianity – coexist peacefully surrounded by archaeological monuments of several ancient civilizations,” noted President Plevneliev.

In addition, he pointed to Bulgaria’s ongoing fostering of dialogue through the Sofia Platform which promotes an exchange of views and best practices among government officials, experts, representatives of civil society and non-governmental organizations, focussing on the transition process in Central and Eastern Europe, the Balkans and the Middle East.

“This forum has shown that though the historical, cultural and political realities vary in different countries and regions, conclusions and lessons learned can be relevant in the field of national reconciliation, rule of law, institution building and security sector reform,” he added.

In his statement, the Bulgarian President also addressed a range of other issues, including terrorism, the situation in Syria, the Middle East peace process and disarmament.

The Assembly’s General Debate, an annual occurrence held at UN Headquarters in New York, will conclude on 1 October. During the intervening week, the world’s heads of State and government and other high-level officials are expected to present their views and comment on issues of individual national and international relevance. 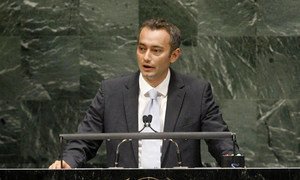 The Balkans will only become a permanently stable region when all the countries that comprised the former Yugoslavia are accepted as members of the European Union, Bulgaria’s Foreign Minister told the General Assembly today.