25 September 2012
Addressing the United Nations General Assembly, the President of the Dominican Republic, Danilo Medina Sanchez, today called on international financial institutions to approach developing country issues with greater understanding, in order to break the “vicious cycle” of poverty and social exclusion, as a basis for development.

“We need to have them employ more enriched indicators that have a greater capacity to capture and measure the complex and dynamic nature of human development,” President Medina added in his statement to the Assembly’s General Debate. “And this means working together to overcome exclusion, and not to maintain poverty and extreme poverty in an indefinite manner.”

Scores of the world’s heads of state and government and other high-level officials are attending the Debate, at UN Headquarters in New York, and are expected to present their views and comment on issues of individual national and international relevance over the coming days.

In his remarks, the Dominican leader said that the majority of agencies in the international financial system prefer to continue using “one-dimensional measurements” centred on monetary income – through the use of various measures of profit or national production expressed in per capita figures, for example – to measure and catalogue the development of developing countries and to define policies regarding conditions of access to international financial cooperation.

“Our country, the Dominican Republic, according to these kinds of measurements, has been classified in recent years as an upper-middle-income country,” he said. “However, more than a third of our citizenship continues to live in conditions of poverty. So then, how is it that countries like our own are excluded from development assistance?”

He noted that the “optimism” of international poverty measures does not seem to agree with the perception of many people around the world, who feel that the growth in gross domestic product has done nothing to lessen their sense of despair, nor, in particular, discontent among youth, who are not finding decent jobs.

“This discrepancy between the optimism of various international measurements and the discontent to be found on our streets, can be attributed to the use of inadequate indicators to measure poverty, development and well-being,” President Medina said.

The President noted that measuring the development of countries exclusively in terms of national per capita income leads to decisions that have a negative impact on their efforts toward development. As an example, he cited how when a country is classified according to these criteria, international cooperation contributions are reduced, making access to international bank loans more difficult or more expensive. 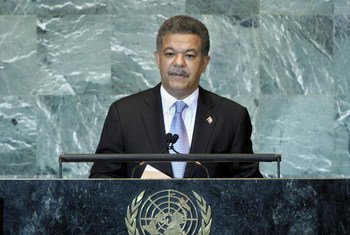 22 September 2011
Blaming speculation for the high price of food and oil, and arrogance and greed for the global economic crisis, the Dominican Republic called at the United Nations today for new market rules and proposed a 5 per cent tax on financial transactions to spur growth and prosperity.