25 September 2012
One of the first world leaders to address the United Nations General Assembly’s high-level debate today, Brazilian President Dilma Rousseff called on countries to boost international efforts to tackle the global economic crisis, stressing that a balance must be found to stimulate growth while at the same time controlling public spending without resorting to extreme austerity measures.

“The grave economic crisis that began in 2008 has taken on new and worrisome contours,” she said. “The choice of orthodox fiscal policies has been worsening the recession in the developed economies, with repercussions for the emerging countries.”

Scores of the world’s heads of state and government and other high-level officials are attending the Assembly’s General Debate, at UN Headquarters in New York, and are expected to present their views and comment on issues of individual national and international relevance over the coming days.

In her remarks to the gathering, President Rousseff stressed that countries must find a path that combines appropriate fiscal adjustments with measures to stimulate investment and demand to halt the ongoing recession and ensure future economic growth.

In particular, the Brazilian President noted that monetary policy cannot be the only response to growing unemployment and poverty as this is causing imbalance in exchange rates, which, in turn, is creating an artificial appreciation of emerging countries’ currencies.

“There will be no effective response to the economic crisis without strengthened coordination efforts between United Nations members and multilateral bodies such as the G20 [Group of 20], the IMF [International Monetary Fund] and the World Bank,” she said.

She added, “This coordination must attempt to reconfigure the relationship between fiscal and monetary policy, in order to prevent the deepening of the recession, control the currency war and once again stimulate global demand.”

Countries must build a comprehensive pact for the coordinated resumption of global economic growth, President Rousseff said, noting that this is crucial to prevent social unrest and despair prompted by high unemployment rates, and social inequality.

The Brazilian leader emphasized that Brazil has addressed the crisis domestically by exerting strict control over public spending, while simultaneously increasing investments in infrastructure, education and social inclusion.

“We have overcome the incorrect view according to which measures to stimulate growth are incompatible with austerity plans. This is a false dilemma,” she said. “Fiscal responsibility is as necessary as growth measures are indispensable, for fiscal consolidation can only be sustainable in a context of economic recovery.”

President Rousseff also spoke of the need for multilateral action to achieve all the commitments made at the UN Conference on Sustainable Development (Rio+20) which Brazil hosted in June. The Conference, she emphasized, helped to set a starting point for a sustainable development agenda for the 21st century, and give countries guidance as to how to address challenges such as climate change, poverty and exploitation of natural resources.

“Rio+20 shone a powerful light on the future we want. We have an obligation to heed the many warnings being sounded by science and society,” Ms. Rousseff said. “In a context of environmental challenges, economic crises and threats to peace in different parts of the world, Brazil continues committed to working with its neighbours to build an environment of democracy, peace, prosperity, and social justice.”

Earlier today, the Brazilian President met with Secretary-General Ban Ki-moon, who thanked her for making the Rio+20 Conference a success and expressed his appreciation for Brazil’s contribution to UN peacekeeping operations in Haiti. 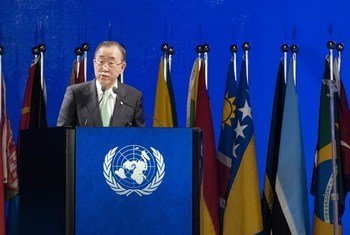