24 August 2012
Secretary-General Ban Ki-moon has applauded the political and social progress in Liberia’s post-conflict recovery, but cautioned that much still remains to be done to address the wrongs of the past.

“I welcome the important efforts being made to transform the country,” Mr. Ban wrote in his latest progress report to the Security Council on the UN Mission in Liberia (UNMIL). “Much remains to be done, however, to address the historical injustices that persist, so that all Liberians feel that they are benefitting from the country’s progress in stability, democracy and development,” he added.

The UN has maintained a peacekeeping force in Liberia since 2003 to bolster a ceasefire agreement ending a decade of war that killed nearly 150,000 people, mostly civilians. UNMIL’s mandate includes helping to restore the rule of law and democratic processes as well as facilitating humanitarian assistance.

“Coherent and genuine national reconciliation should be at the centre of the Liberian peace process,” Mr. Ban continued, noting that it was essential for all Liberians to have “an opportunity to express their views about how to best address all aspects of reconciliation.”

Mr. Ban also reaffirmed his recommendation, made in his special report of 16 April, that UNMIL’s presence in the country be gradually reduced by about 4,200 troops in three phases between this year and 2015, when it will have a residual presence of approximately 3,750 peacekeepers.

Additionally, the Secretary-General recommended that the Mission’s police component maintain its current strength of 498 advisers and 845 officers in seven formed police units, and be authorized to add three formed units as needed over the next three years. UNMIL currently has a total of 9,195 uniformed personnel, which includes 1,279 police, including those serving in formed police units.

He also requested that the Security Council approve his recommendations and extend UNMIL’s mandate by one year, until 30 September 2013.

Drawing his attention to the security situation along the 700 kilometre shared border between Liberia and Côte d’Ivoire, the UN chief voiced concern about continuing instability in what he said was a volatile and porous area. He welcomed ongoing efforts by both Governments to develop a coordinated strategy with regards to cross-border movements, illicit trafficking, and organized crime.

“Security measures alone will not create lasting stability,” noted Mr. Ban. “I would therefore underline the importance of devoting attention to reconciliation, confidence-building and the development and strengthening of State authority in border areas.”

On 8 June, seven peacekeepers serving with the UN Operation in Côte d'Ivoire (UNOCI) and at least 27 civilians were killed in a series of attacks in the border region, prompting the Government of Liberia to launch a security operation in an effort to stabilize the area. 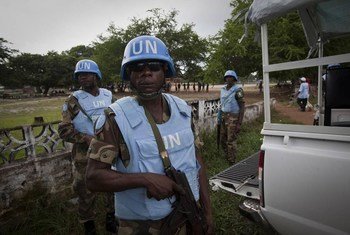 8 May 2012
Secretary-General Ban Ki-moon has recommended that the United Nations peacekeeping operation in Liberia be reduced gradually by about 4,200 troops in three phases between this year and 2015, when it will have a residual presence of approximately 3,750 soldiers.