UN Photo/JC McIlwaine
Secretary-General Ban Ki-moon with Joint Special Representative of the UN and League of Arab States on the Syrian crisis.

24 August 2012
Meeting in New York today, Secretary-General Ban Ki-moon reiterated his support for the new Joint Special Representative of the United Nations and the League of Arab States on the Syrian crisis, Lakhdar Brahimi, adding that he would count with the full backing of the international community when he assumes his position on 1 September.

“You have all the respect and full support of the international community,” Mr. Ban told Mr. Brahimi at UN Headquarters. “It is crucially important that the Security Council and all the United Nations systems support your role.”

Syria has been wracked by violence, with more than 17,000 people, mostly civilians, killed since the uprising against President Bashar al-Assad began some 17 months ago. Over recent days, there have been reports of an escalation in violence in many towns and villages, as well as the country’s two biggest cities, Damascus and Aleppo.

Speaking before a private meeting, Mr. Ban said Mr. Brahimi has a very important and crucial task to bring peace and stability to Syria, and to promote human rights there. He also praised Mr. Brahimi’s talent and expertise on the region, which he will bring to his new position.

Mr. Brahimi, an Algerian national, has served the UN in various high-level roles over the past two decades, including heading the UN Assistance Mission in Afghanistan (UNAMA), serving as an advisor on a range of issues, and chairing an independent panel on peacekeeping operations which released its keynote findings, known as the ‘Brahimi Report,’ in 2000. Mr. Brahimi also served with the League of Arab States from 1984 to 1991 as an Algerian diplomat.

In their exchange, Mr. Brahimi thanked the Secretary-General for the opportunity to serve the Syrian people, and stressed that they would be his “first masters,” and that he would consider their interests first and foremost.

Appointed last week, Mr. Brahimi is taking over the peace-facilitation role which has been carried out since February by former UN Secretary-General Kofi Annan, who provided his good offices on behalf of the UN and Arab League, with the aim of bringing an end to all violence and human rights violations in Syria, and promoting a peaceful solution to the conflict. Mr. Annan’s mandate ends on 31 August. 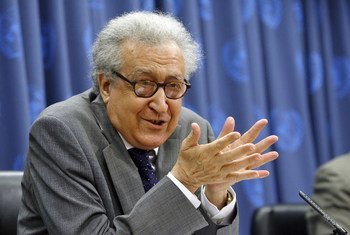 17 August 2012
Veteran diplomat Lakhdar Brahimi will be the new Joint Special Representative of the United Nations and League of Arab States for the crisis in Syria, taking over the peace-facilitation role played over the past several months by former UN Secretary-General Kofi Annan, a spokesperson for the world organization said today.