The head of the joint United Nations-African Union mission in the western Sudanese region of Darfur (UNAMID) today reported a decrease in clashes and ethnic conflict, as well as a decline in criminal activities against civilians, including banditry, and fewer attacks on humanitarian convoys in the area.

“After travelling throughout Darfur and listening to the needs of many communities, the mission increased patrols from 100 a day to an average of 160 per day in the first quarter of 2012,” said Ibrahim Gambari, the AU-UN Joint Special Representative for Darfur and the head of UNAMID, at a news conference in the Sudanese capital, Khartoum.

“Our patrols have not only increased in number, they have also been more robust and are covering larger geographic areas,” he added.

The humanitarian situation has also been relatively stable over the past six months, he said, highlighting an increase in the number of internally displaced persons (IDPs) returning voluntarily to their villages of origin, particularly in West Darfur.

He cited figures compiled by the UN Office for the Coordination of Humanitarian Affairs (OCHA), which show that, as of 10 April, an estimated 109,000 IDPs had voluntarily returned. Some 31,000 refugees had also come back from Chad.

“In this regard, UNAMID has provided logistical and security support to humanitarian agencies assisting these returnees,” said Mr. Gambari.

He said the mission has also been focussing on implementing the so-called Quick Impact Projects to provide water and sanitation services, education, health, rule of law, and livelihood support.

Despite these gains, challenges remain, including movement restrictions for UNAMID personnel, Mr. Gambari said, highlighting the ongoing problem in the Jebel Marra area and most recently in Kutum.

“Many of our peacekeepers operate in the most difficult of circumstances and several have paid the ultimate price in protecting those they are here to serve – the people of Darfur. In the past six months, we have lost six personnel who were killed while on patrols,” he said.

On the political front, Mr. Gambari said progress has been steady since last July, when the Government and the Liberation and Justice Movement (LJM) – one of several rebel groups in Darfur – signed the Doha Document for Peace in Darfur.

In support of the Document, the mission began its work in implementing the Ceasefire Commission, which monitors violations of the agreement, various older accords and dialogue among parties that have signed, as well as ensures the safety of those implementing the accords.

“The monitoring and verification mechanism, chaired by the UNAMID Force Commander, last month conducted verification exercises of the Liberation and Justice Movement dispositions in Darfur. Despite some obstacles, the exercise was satisfactorily conducted,” he said. 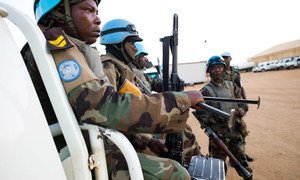 A United Nations-African Union assessment team will be sent shortly to a North Darfur community that was the scene of clashes this week between Sudanese national security forces and civilians that resulted in the deaths of three people, it was announced today.