12 April 2012
The Joint Special Envoy of the United Nations and the League of Arab States, Kofi Annan, said that he is encouraged by reports that the situation in Syria is relatively quiet today and that the cessation of hostilities appears to be holding.

“Syria is apparently experiencing a rare moment of calm on the ground,” Mr. Annan said in a statement on the day that a ceasefire that he brokered was to take effect. “This is bringing much-needed relief and hope to the Syrian people who have suffered so much for so long in this brutal conflict.”

He said calm must now be sustained and that all parties have obligations to fully implement his six-point plan to bring the violence to an end. The plan includes both the military provisions and a commitment to start a political process that will addresses the aspirations of the Syrian people.

“I urge all Syrians to seize this opportunity. The international community is determined to work with the Syrian people to support this process,” said Mr. Annan, who briefed the Security Council today via video-link on the latest developments.

He said that Secretary-General Ban Ki-moon will be asking the Security Council to approve the deployment of a UN observer mission as soon as possible, a move that would allow quick progress towards the launch of serious political dialogue.

“This is the time for all Syrians to come together in the hope that they can begin to heal their wounds and initiate a political transition to a democratic, plural political system, in which citizens have equal rights and equal opportunities, regardless of their affiliations or ethnicities or beliefs,” said Mr. Annan.

In New York, Ambassador Susan Rice of the United States, which holds the Security Council’s presidency this month, said Mr. Annan told the Council in a closed-door briefing by video that today’s developments in Syria “do not constitute full compliance by the Syrian Government in particular of item two of his six-point plan, as Syrian forces and weapons remain in and around population centres.”

“He emphasized that Syrian troops and armour must return to their barracks immediately,” said Ms. Rice. “Additionally, Mr Annan stated that the Syrian Government has not yet complied with the other aspects of his six-point plan.” She also quoted Mr. Annan as having informed the Council of “unconfirmed reports of some violence in some cities.”

Mr. Annan emphasized to the Council that “he wants to get eyes and ears on the ground quickly and that parallel efforts must be made to begin the political process,” according to Ms. Rice.

The Special Envoy requested authorization from the Council for an advance element of a monitoring mission to go to Syria immediately to liaise with the parties and to begin reporting on the situation on the ground, she added.

He had also requested the Council to express its intention to authorize a full monitoring mission “provided that the violence has not resumed next week and, among other things, that there is complete freedom of movement, unimpeded access throughout the entire Syrian territory, unobstructed communications, unimpeded access to all Syrians by the advance mission and the monitoring group itself, and security guarantees from all parties without prejudice to freedom of movement,” said Ms. Rice.

The violence in Syria, which began in March 2011 as a protest movement similar to those witnessed across the Middle East and North Africa, has claimed over 8,000 lives, mostly civilians, and displaced tens of thousands.

Bahrain: Ban condemns bombing, voices concern over use of force against protesters 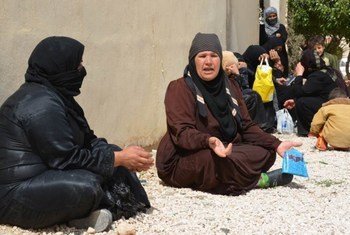 11 April 2012
The Joint Special Envoy of the United Nations and the League of Arab States, Kofi Annan, today received a letter from the Syrian Government informing him of its decision “to cease all military fighting throughout Syrian territory as of 6:00 a.m. (Damascus time), Thursday, 12 April 2012,” Mr. Annan’s spokesperson said today.