UN Photo/E. Schneider
Aerial view of the vast destruction of the Indonesian coast caused by the Indian Ocean tsunami in 2004.

12 April 2012
The United Nations humanitarian arm today praised the level of preparedness and early warning systems of several Indian Ocean countries following an earthquake off the coast of Sumatra, Indonesia, on Wednesday.

“The fact that most people in the affected areas were promptly alerted to the situation and moved to higher ground is a testament to the effectiveness of the preparedness actions and early warning system,” said the head of the UN Office for the Coordination of Humanitarian Affairs (OCHA) in Indonesia, Ignacio Leon-Garcia.

Evacuation orders were issued immediately for coastal areas at risk in Indonesia followed by Thailand, Sri Lanka, India and Myanmar. Two hours later an 8.2-magnitude aftershock triggered a second wave of tsunami warnings across the region.

“It is during such moments that the effectiveness of our work on preparedness and early warning can be assessed,” said Mr. Leon-Garcia. “Based on this instance, I think we can be reassured that we are on the right track.”

In the last seven years since the 2004 Indian Ocean Tsunami, which killed more than 226,000 people following a 9.1-magnitude earthquake, affected countries such as Indonesia, Thailand, India and Sri Lanka have invested heavily in disaster response capacity and early warning systems.

National search and rescue agencies and disaster response teams from the Association of Southeast Asian Nations (ASEAN) and the UN were on stand-by across the region and were closely monitoring the situation and exchanging information, OCHA said in a news release.

While no major tsunamis occurred, and there are no reports of significant damages, early warning systems are being praised for their effectiveness, in particular the use of mobile phones, which alerted people to the risk so they could move to higher ground.

In a statement issued last night by his spokesperson, the President of the General Assembly, Nassir Abdulaziz Al-Nasser, stressed that the frequency of such natural disasters is “a reminder that we must focus our efforts on preparing and tackling this urgent phenomena,” and called on the international community to redouble its efforts on disaster prevention and response.

Mr. Al-Nasser has convened a thematic debate today in the Assembly on disaster risk reduction. 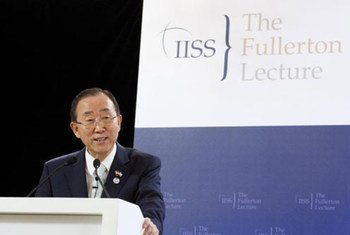 23 March 2012
Secretary-General Ban Ki-moon today praised Singapore’s response to natural disasters as well as it policies on sustainable development and added that the country’s participation and experience vital for the international community.