29 March 2012
A United Nations-African Union assessment team will be sent shortly to a North Darfur community that was the scene of clashes this week between Sudanese national security forces and civilians that resulted in the deaths of three people, it was announced today.

A joint investigation with the Sudanese authorities will also be conducted into the incident in Kabkabiya, in which three people died, according to a statement issued by the joint UN-AU peacekeeping force in Darfur, known by the acronym UNAMID.

Violence erupted during demonstrations in Kabkabiya on Tuesday over the planned relocation of a local market, reportedly without prior consultations with the concerned communities, said the mission.

Later in the day, demonstrators gathered again outside the UNAMID compound, where the situation grew “tense” as some individuals attempted to force their way into the camp. As a result, three civilians, one UN national staff member and one peacekeeper are currently being treated in UNAMID’s hospital.

During a visit to Kabkabiya yesterday, the Joint Special Representative and head of UNAMID, Ibrahim Gambari, offered his condolences for the loss of life as a result of the clashes as well as the mission’s mediation support to resolve the conflict.

He also expressed his sadness at the violence that took place in what he described as an otherwise peaceful and diverse community.

“The authorities of the Kabkabiya area must be more sensitive to the needs of the various communities who deserve to lead productive and secure lives,” the mission’s head said, adding that any decisions which may affect how people live should be taken with care and after consultations with those affected.

Mr. Gambari also regretted statements attributed today to the North Darfur government and other parties, alleging that UNAMID had a role in the deaths of civilians during the Kabkabiya incident.

“UNAMID has confirmed that it did not attempt to harm any member of the population during the demonstrations in front of its camp this past Tuesday and Wednesday,” the mission stated.

Deployed at the beginning of 2008, UNAMID is tasked with protecting civilians, promoting an inclusive peace process and helping ensure the safe delivery of humanitarian assistance across Darfur, an arid region on Sudan’s western flank that has been the scene of fighting between Sudanese Government troops and their allied militias and rebels for over eight years. 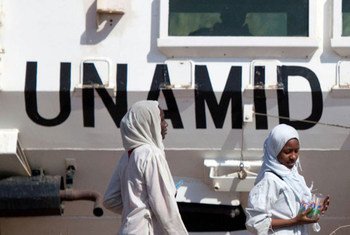