Countries held the line against malaria cases and deaths in 2021: WHO report

© UNICEF/Mark Naftalin
A woman receives medication to treat her four-year-old daughter who is suffereing from malaria in Jonglei State, South Sudan.

Countries held the line against malaria cases and deaths in 2021: WHO report

Despite the continued impact of COVID-19, malaria cases and deaths remained stable throughout last year, according to new data released on Thursday by the World Health Organization (WHO).

According to this year’s World Malaria Report, countries around the world largely held the line against further setbacks to malaria prevention, testing and treatment services in 2021.

“Following a marked increase in malaria cases and deaths in the first year of the COVID-19 pandemic, malaria-affected countries redoubled their efforts and were able to mitigate the worst impacts of COVID-related disruptions to malaria services”, said WHO chief Tedros Adhanom Ghebreyesus.

“We face many challenges, but there are many reasons for hope”, Tedros said.

“By strengthening the response, understanding and mitigating the 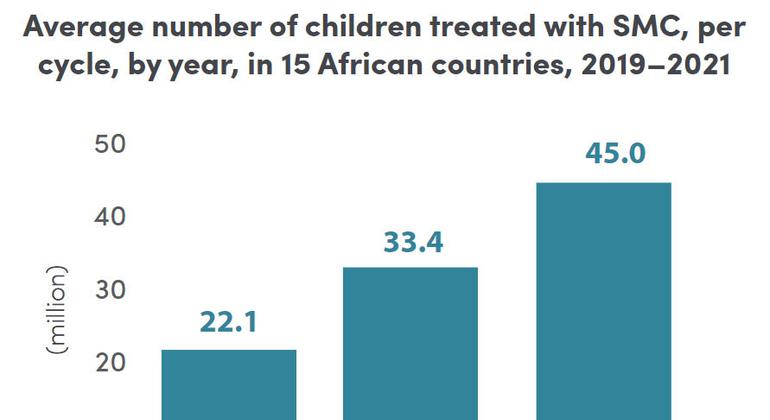 risks, building resilience and accelerating research, there is every reason to dream of a malaria-free future”.

In 2020, more insecticide treated bednets (ITNs) – the primary defense in most malaria-endemic countries – were distributed than in any year on record.

And distributions in 2021 were strong overall, similar to pre-pandemic levels.

However, Benin, Eritrea, Indonesia, Nigeria, Solomon Islands, Thailand, Uganda, and Vanuatu distributed less than 60 per cent of their ITNs and Botswana, Central African Republic, Chad, Haiti, India, Pakistan and Sierra Leone did not dispense any.

In 2021, seasonal malaria chemoprevention – a highly effective, community-based intervention – reached nearly 45 million children in 15 African countries, which was a substantial increase from 33.4 million in 2020 and 22.1 million in 2019.

And despite supply chain and logistical challenges during COVID, a record number of rapid diagnostic malaria tests were distributed to health facilities in 2020.

An estimated 242 million artemisinin-based combination therapies – the most effective treatment for P. falciparum malaria – were delivered worldwide in 2021 compared to 239 million in 2019.

Despite successes, challenges continued and led the statistical field, particularly in Africa, which shouldered about 95 per cent of cases and 96 per cent of deaths worldwide in 2021.

Disruptions during the pandemic and converging humanitarian crises, health system challenges, restricted funding, rising biological threats and a decline in the effectiveness of core disease-cutting tools, threatened the global response.

“Despite progress, the African region continues to be hardest hit by this deadly disease”, said WHO Regional Director for Africa Matshidiso Moeti, noting that news tools and the funding to deploy them are “urgently needed to help us defeat malaria”.

Malaria funding in 2021 stood at $3.5 billion, an increase from the two previous years but well below the estimated $7.3 billion required globally to stay on track.

At the same time, a decline in the effectiveness of key malaria control tools, most crucially ITNs, is impeding further progress against malaria.

Among the threats are insecticide resistance, insufficient access, and loss of ITNs due to the stresses of daily use outpacing replacement.

Source: World Malaria Report 202
Trends in malaria cases and deaths in 11 high burden countries, between 2015 and 2021.

For African countries to build a more resilient response, WHO recently launched a strategy curbing antimalarial drug resistance and an initiative stopping the spread of the Anopheles stephensi malaria vector.

Additionally, a new global framework to respond to malaria in urban areas, developed jointly by WHO and UN-Habitat, provides guidance for city leaders and malaria stakeholders.

Meanwhile, a robust research and development pipeline is set to bring a new generation of malaria control tools that could help accelerate progress towards global targets, including long-lasting bednets with new insecticide combinations; spatial repellents; and genetic engineering of mosquitoes.

Also in the pipeline are new diagnostic tests, next-generation medicines to combat drug resistance, and other malaria vaccines.

According to the report, malaria-endemic countries should continue use a primary healthcare approach to strengthen health systems and ensure quality services and interventions for everyone in need.

World Bank/Arne Hoel
Infant in Ghana protected from malaria by a bednet.
♦ Receive daily updates directly in your inbox - Subscribe here to a topic.
♦ Download the UN News app for your iOS or Android devices. 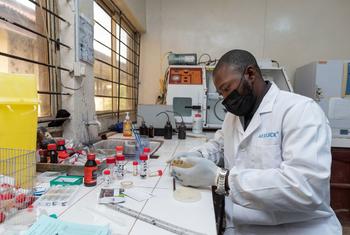 A new strategy has been launched to address the urgent problem of antimalarial drug resistance in Africa, the World Health Organization (WHO) announced on Friday. 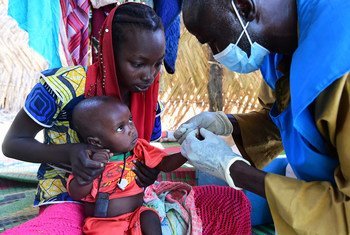 The pharmaceutical company GSK has been awarded a contract to produce the world’s first malaria vaccine so that millions more children will be protected against the killer disease, the UN Children’s Fund (UNICEF) announced on Tuesday.