The outlook for global labour markets has worsened in recent months and if current trends continue, vacancies will grow more scarce while global jobs growth will deteriorate significantly during the rest of the year, according to a new report by the International Labour Organization (ILO).

Estimates from ILO for the third quarter of 2022, indicate that the level of hours worked was 1.5 per cent below pre-pandemic levels, amounting to a deficit of 40 million full-time jobs.

Unemployment and inequality are set to rise due to 🌍 crises.

are deeply impacting the #worldofwork.

Inflation up, wages down

The 10th edition of the Monitor on the World of Work confirms that rising inflation is causing real wages to fall in many countries.

This comes on top of significant declines in income during the COVID-19 crisis, which affected low-income groups most in many countries. The report finds that labour market inequalities are likely to increase, contributing to a continued divergence between developed and developing economies.

According to the Monitor, a set of multiple and overlapping crises, compounded by the Ukraine war and subsequent negative spill-over effects, have materialized over 2022 which have impacted the world of work deeply.

Food and energy in flux

A slowdown in economic growth and aggregate demand will also reduce demand for workers as uncertainty and worsening expectations affect hiring.

The Monitor finds that worsening labour market conditions are affecting both employment creation and the quality of jobs, pointing out that there is already data that suggests a sharp labour market slowdown.

At the beginning of 2022, the number of global hours worked was recovering strongly, notably in higher-skilled occupations and among women.

However, this trend was driven by an increase in informal jobs, jeopardizing 15 years of progress trend towards formalization.

ILO says that a strong commitment is needed to initiatives such as the UN Global Accelerator on Jobs and Social Protection; its objective is to create 400 million jobs and extend support to the four billion people who have nothing to fall back on should they fall sick or get hurt at work.

A rapid end to the conflict in Ukraine, as demanded in the resolutions of the ILO Governing Body, would further contribute to improving the global employment situation, the UN agency noted.

“We need the implementation of a broad set of policy tools, including interventions in the prices of public goods; the rechannelling of windfall profits; strengthening income security through social protection; increasing income support; and targeted measures to assist the most vulnerable people and enterprises.”

© UNICEF/Alessio Romenzi
A 13-year-old boy works in a mechanic's shop in Syria.
♦ Receive daily updates directly in your inbox - Subscribe here to a topic.
♦ Download the UN News app for your iOS or Android devices.

Collective bargaining in the workplace, essential for global recovery: ILO 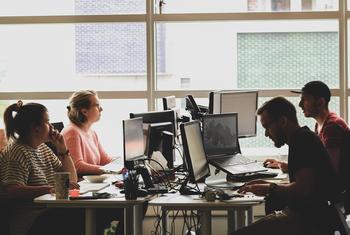 With an estimated 12 billion workdays lost annually due to depression and anxiety, costing the global economy nearly $1 trillion, more action is needed to tackle mental health issues at work, the World Health Organization (WHO) and the International Labour Organization (ILO) said on Wednesday. 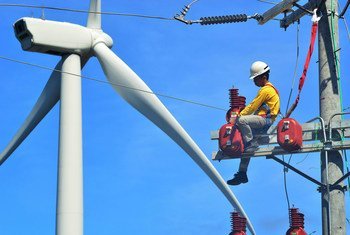 A year after the UN launched an initiative to accelerate green and digital job creation, and expand social protection, the Secretary-General on Friday urged world leaders to “put people first” by making massive investments in their future wellbeing.