Political solution still the only path to peace in Syria: UN Special Envoy

© UNICEF/Delil Souleiman
A family lives in a makeshift home in an informal settlement in Raqqa city, northeast Syria.

Political solution still the only path to peace in Syria: UN Special Envoy

With peace in Syria still an elusive goal, UN Special Envoy Geir Pedersen appealed on Tuesday for the Security Council to support his efforts to move the parties closer towards a negotiated political solution to end the brutal 11-year conflict.

The country is facing its worst economic crisis since the war began, as well as a deadly cholera outbreak that is rapidly spreading.

Mr. Pedersen reported on his recent “busy period of diplomatic engagement” with key Syrian and international stakeholders, including in connection with the stalled Constitutional Committee meetings in Geneva.

“This political solution is the only path to sustainable peace,” he said, speaking from the Swiss city.

“Sadly, we are a long way from this goal at present, and there are challenging diplomatic and ground realities that make advancing towards a comprehensive solution difficult. But the status quo should not be acceptable and there are ways forward.”

Seven years ago, the Security Council adopted Resolution 2254 which outlines a roadmap for a peace process in Syria.

So far, the political process has not delivered for the Syrian people, said Mr. Pedersen, and conflict remains “very active” across the country.

Listing examples, he said the terrorist group ISIL remains a serious threat.  One of the largest weapons caches since its fall was recently discovered in the northeast, underscoring the insurgents’ continued capacity to carry out attacks.

Pro-Government airstrikes also were reported in areas of northwest Syria where none had been reported for a long time.

Meanwhile, in the northeast, drone strikes, mutual shelling and confrontations have been reported between the Syrian Democratic Forces on the one hand, and Türkiye and armed opposition groups on the other.

The Special Envoy detailed his many engagements over recent weeks, including with Syria’s Foreign Minister and the president of the opposition Syrian National Council (SNC).

He also met with the Foreign Ministers of Iran, Russia, and Türkiye, and their counterparts from Egypt and Jordan, as well as senior officials from Arab countries, the United States, Germany, and other European nations.

Mr. Pedersen said he is pushing for all stakeholders “to engage on step-for-step confidence building measures” towards advancing Resolution 2254.

“The key Syrian and international stakeholders need to rebuild their confidence that cooperation on Syria is possible, that the other side is willing and able to deliver, and that Syria can be firewalled from other conflicts. That confidence can only be built by concrete actions,” he stressed.

Engagement will continue.  So far, some countries have identified “concrete areas for potential steps”, he said, but talks need to go further.

The UN envoy also continues his work to unblock obstacles surrounding the reconvening of the Syrian Constitutional Committee, which comprises representatives from the Government, the opposition and civil society.

Government nominees have not come to Geneva after Russia cited concerns over the venue.

Mr. Pedersen has since discussed the matter with Russia, Switzerland, Syria and the SNC.

“Even assuming sessions resume in Geneva, this would not be sufficient to restore the credibility of the Committee in the eyes of most Syrians and international stakeholders,” he said.

“That is why I am seeking to work with the parties and the co-chairs so that, when meetings reconvene, there is political will to engage in a spirit of compromise, with a faster pace, better working methods and more substance.”

The Special Envoy and his team continue to monitor the issue of detained, disappeared, and missing persons.

“Regrettably, we continue to receive reports of arbitrary arrests throughout the country,” he said.

“Meanwhile, six months after the presidential amnesty decree, there is nothing new to report. Despite our continued engagement, official information is not forthcoming, nor has independent monitoring been facilitated.”

Mr. Pedersen began his briefing by thanking the many Syrians, both inside and outside the country, who continue to engage with his office.

He expressed particular gratitude to Syrian women, noting that although they have suffered countless indignities in the conflict, many have found ways to come together across their divides.

“They embody a hope that a political settlement can bring real peace and enable Syrian women to assume their rightful and hard-earned place in society,” he said.

The Council also heard how communities in Syria are struggling to survive amidst a spiraling security, public health and economic crisis.

Reena Ghelani, a Director in the UN’s humanitarian affairs office, OCHA, provided an update on the cholera outbreak.

More than 20,000 suspected cases of the waterborne disease have been confirmed so far, and at least 80 people have died.

“This is a tragedy, but it should not come as a surprise,” she remarked.  “Millions of people across Syria lack reliable access to sufficient and safe water, and the health system has been devastated by over a decade of conflict.”

© UNOCHA/Ali Haj Suleiman
In a camp for people displaced by conflict in the north-west of Syria, children cool down from soaring summer temperatures in the back of a truck made into a temporary pool.

The outbreak is further compounded by factors such as poor rainfall in many locations, severe drought-like conditions, and damaged water infrastructure.

The UN and partners have been sounding the alarm on the water crisis in northern Syria for at least the past year, said Ms. Ghelani.

“The crisis is likely to get even worse,” she warned. “The outlook from now to December suggests an increased probability for below-normal precipitation and above-normal temperatures.”

The UN has a three-month plan to respond to the outbreak. It calls for $34.4 million to assist 162,000 with health services, and five million with water, sanitation and hygiene assistance.

Humanitarians are also gearing up for another bitter winter in Syria, with snowstorms, sub-zero temperatures, rains and flooding expected soon.

“This year, the number of people who need winterization assistance has increased by a staggering 30 per cent across the country compared to the previous year,” said Ms. Ghelani.

“In the northwest, some two million people depend on winter assistance to meet their most basic needs. Most are women and children living in camps with limited or no access to heating, electricity, water, or sewage disposal.”

Ms. Ghelani stressed that “if this gap is not filled, families will not receive the heating, fuel, blankets, and winter clothes that they desperately need to keep warm.” 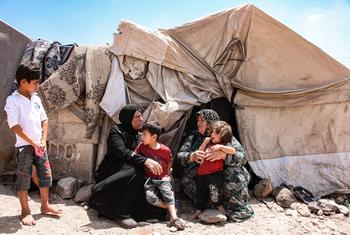 “Progress is possible” to end more than 11 years of war in Syria, in order to produce a peaceful future for all, the UN’s Deputy Special Envoy for the country told the Security Council on Wednesday.