“Progress is possible” to end more than 11 years of war in Syria, in order to produce a peaceful future for all, the UN’s Deputy Special Envoy for the country told the Security Council on Wednesday.

Najat Rochdi said she had already seen the potential for bridging divides between Syrians during civil society dialogues, and the divergent views represented through the Women’s Advisory Board, which “demonstrates to all of us that, despite many differences among them, common ground can be found.”

She added that “Syrians can come together to rescue their country and focus on its future”, but it was up to the international community and those invested in a diplomatic end to the fighting, to “advance a sustainable, inclusive political solution”, and “correct Syria’s trajectory”, moving instead to a ceasefire and lasting peace.

Ms. Rochdi began her briefing to the Council by outlining the steps being taken by her office, led by Special Envoy Geir Pedersen, to advance the peace process, in the face of continued civilian suffering.

The immediate concerns are fourfold she said. First, civilian safety and security, and the need for a “consolidated ceasefire”. Secondly, continued humanitarian suffering, exacerbated by Syria’s economic collapse. Third, the continuing anguish for the “tens of thousands” arbitrarily detained, abducted or “forcibly disappeared” and those missing.

Finally, she highlighted the ways in which women and girls continue to be hugely impacted by ongoing war, and the UN’s efforts to “ensure the meaningful participation of Syrian women, equally and together with men”, in forging a sustainable peace.

Ms. Rochdi said it was clear that no political process could move forward, “meaningfully or sustainably, until violence is curtailed and ultimately ends.”

Humanitarian relief efforts, she argued, would be advanced so much more if the violence could be curtailed, and by addressing factors which continue to drive displacement.

“Addressing all these factors, is part of creating a safe, calm and neutral environment in which a political process can unfold. Action is also needed to deal with Syria’s economic collapse – a major source of needs.”

UN relief chief, Martin Griffiths, warned ambassadors that without adequate and flexible resources provided by international donors, the lifesaving humanitarian operation in Syria, “will have no option but to drastically reduce assistance.”

Out of a total ask of some $10.5 billion for the humanitarian response this year, together with the refugee and resilience plan, only around a quarter of what’s needed in humanitarian aid alone, has been forthcoming.

Some 14.6 million Syrians rely on some kind of aid, more than half of them children, and winter is fast approaching, the UN Emergency Relief Coordinator said.

Give peace a chance

“The people of Syria deserve the chance to build a dignified life, away from reliance on emergency aid, a life with hope for the future. Today, in Syria, millions are living without that hope.”

He said the UN was doing its utmost to keep aid flowing into the country, helping on average, 900,000 each month in the war-ravaged northeast, with a huge need to scale up cross-line convoys in the northwest.

Mr. Griffiths expressed alarm over the arrival of cholera in the country in the past few weeks, saying that it was “a stark reminder of just how critical our continued support remains to the people of Syria.”

More than four million have benefitted from UN projects that contribute to early recovery and resilience so far in 2022, he said.

Return to larger-scale fighting may be head, rights experts warn

Earlier in the day, in Geneva, UN independent rights experts warned that a violent escalation in the Syrian conflict is possible, as they published their latest report into the human rights ramifications of the brutal war.

Head of the Independent Commission of Inquiry on Syria, Paolo Pinheiro, said that “another Turkish ground operation” remains a threat in the north, amid the “continued mobilization and fighting” between Turkish and Turkish-backed forces and Kurdish-led opponents.

The flare-up has seen several deadly incidents in recent weeks, including the August shelling of a crowded market in al-Bab city; 16 civilians were killed, including five children.

Commissioner Lynn Welchman noted that Israel, the US and Iran-backed forces had also continued to engage in operations in Syria.

The panel, which was appointed by and reports to the Human Rights Council, also noted that Russia still actively supports the Syrian Government, particularly using “airstrikes that have killed civilians and targeted food and water sources, including a well-known water station serving over 200,000 people”, it said in a statement.

Last week, fresh airstrikes caused further deaths and injuries in Idlib province, which are currently under investigation, the Commission of Inquiry said. 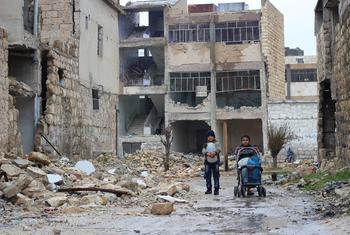 The official declaration of a cholera outbreak in the Aleppo region of Syria at the weekend, represents “a serious threat to people in Syria”, and the whole Middle East region, said the UN humanitarian relief coordinator for the country on Tuesday. 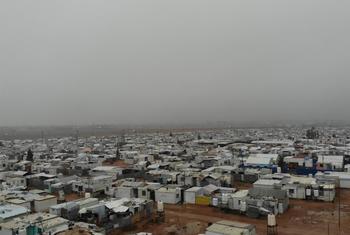 2022 marks the tenth anniversary of the UN-run Za’atari refugee camp in Jordan. It is the largest in the Middle East – and one of the largest in the world – and home to some 80,000 Syrians. UN News spoke to some of the refugees about life at the camp, and their hopes for the future.