Mikhail Gorbachev: UN chief hails ‘one of a kind statesman who changed the course of history’

UN Photo
Mikhail Gorbachev, former President of the Soviet Union, at a public meeting in Geneva. (2005)

Mikhail Gorbachev: UN chief hails ‘one of a kind statesman who changed the course of history’

The Secretary-General has paid warm tribute to the last leader of the Soviet Union, Mikhail Gorbachev, whose death aged 91 was announced on Tuesday, describing him as the person who “more than any other” brought about the peaceful end of the Cold War, which had dominated international relations since the 1940s.

António Guterres said he was deeply saddened to hear the news of his passing in Moscow, announced by Russian State news agencies, which reported that he had died after a “long and grave illness.”

Mikhail Gorbachev was a one-of-a kind statesman who changed the course of history.The world has lost a towering global leader, committed multilateralist, and tireless advocate for peace.I’m deeply saddened by his passing. pic.twitter.com/giu2RHSjrQ

Mr. Guterres extended his heartfelt condolences to the whole Gorbachev family, and to the people and Government of the Russian Federation.

“The world has lost a towering global leader, committed multilateralist, and tireless advocate for peace.”

Mr. Gorbachev became Soviet leader in 1985, when nuclear tensions between East and West were still running high, with a reformist programme designed to revive the economy and modernise the political system, adopting the policies of “perestroika”, and “glasnost”, or openness.

He ended the Cold War by successfully negotiating with US President Ronald Reagan to abolish a whole class of missiles through the Intermediate Nuclear Forces Treaty, ended the Soviet occupation of Afghanistan, and precipitating the breakup of the Warsaw Pact, Soviet domination of eastern Europe, and ultimately the Soviet Union itself, all in the space of just six years.

In 1990, lauded internationally, but suffering increasing criticism at home, he was awarded the Nobel Peace Prize, for the leading role that he had played in the “radical changes in East-West relations”, according to the judges.

The Secretary-General noted in his statement, that in receiving the prize, “he observed that ‘peace is not unity in similarity but unity in diversity.’ He put this vital insight into practice by pursuing the path of negotiation, reform, transparency and disarmament.”

Mr. Gorbachev faced a coup initiated by hard-line communist elements in 1991, and was arrested while on a Black Sea vacation, but the then party leader in Moscow, Boris Yeltsin, effectively ended the Soviet army-backed uprising in the capital, and ushered Mr. Gorbachev into retirement, and the final dissolution of the USSR.

Mr. Guterres said that in his later years, Mr. Gorbachev “embraced a new challenge just as vital for the wellbeing of humankind: creating a sustainable future by cultivating harmonious relationships between humans and the environment. It was in this spirit that he founded Green Cross International.” 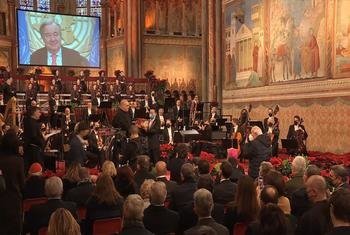 Secretary-General António Guterres received the Lamp of Peace award on Saturday, a major honour from the Catholic Church, which he said recognizes the work of UN personnel “striving for peace around the world”.