UN News
Secretary-General António Guterres accepts, via video conference, the Lamp of Peace award from the Sacred Convent of Assisi in Italy.

Secretary-General António Guterres received the Lamp of Peace award on Saturday, a major honour from the Catholic Church, which he said recognizes the work of UN personnel “striving for peace around the world”.

Reminding that after the horrors of World War in the 20th Century, “the UN was created in the name of peace”, he affirmed that “we are united here today in our pursuit of peace”.

Congratulations @AntonioGuterres on the “Lamp of Peace of Saint Francis” Award. It was an honour for me to receive the award on your behalf today. A much deserved recognition of your tireless efforts to promote peace, justice, respect, tolerance &amp; solidarity. pic.twitter.com/fICxgPrRP1

The Franciscan Lamp of Peace is a replica of a glass oil lamp that glows at the monastic grave of Saint Francis of Assisi, who, throughout his lifetime, inspired environmental ethics.

“As a person of faith with a deep appreciation and respect for the mission of St Francis, this award and ceremony are especially meaningful”, said the UN chief.

From the start of his first term, the UN chief has made the promotion of peace his top priority.

And having seen some of the worst impacts of conflict during his tenure as UN High Commissioner for Refugees, he launched “a surge in diplomacy for peace”.

“I put greater emphasis on prevention, establishing more rigorous systems and frameworks to analyse risks, reinforce decision-making and support Member States to take action before violence escalates”, he informed the ceremony, via videolink.

“When COVID-19 first took hold, I understood it would be a new threat to peace and called immediately for a global ceasefire to fight our common enemy – the virus”.

As an honest broker, bridge builder and messenger of peace, the Secretary-General is determined to use his good offices to build on those initiatives.

“But the struggle for peace is often a Sisyphean task, given the complexity of today’s interlinked conflicts”, he said. “We live in a world where peace is elusive, and under enormous threat”.

Mr. Guterres painted a picture of countries and regions suffering from prolonged conflicts and places where peace is routinely undervalued and undermined, underscoring that these make moments like this even more important to “honour peace, and reflect on our duty to uphold and promote it”.

UN News
QU Dongyu, Director General of the Food and Agriculture Organization (FAO), receives the Lamp of Peace award on behalf of the Secretary-General.

Because it is not a passive acceptance of the status quo but a concrete act, and sometimes a difficult choice, the top UN official said, “peace makes demands of us”.

“But in our fractured, troubled world, it is a vital one. It is the only one. It remains the driving force behind the work of the United Nations, every day, in every country”, he added.

Quoting Pope Francis’ encyclical Fratelli Tutti, the Secretary-General reiterated that only by walking the path of peace, in solidarity, can we build a better future for all, “because peace can achieve wonders that war never will”.

“In a world where we can choose anything, let us choose peace”, he concluded. 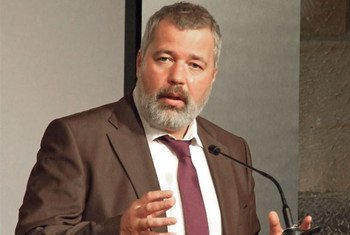 Two campaigning journalists were awarded the prestigious Nobel Peace Prize on Friday, which UN Secretary-General António Guterres said was recognition that a free press is “essential for peace, justice, sustainable development and human rights – and the cornerstone for building fair and impartial institutions”.