The winner of this year’s Nobel Peace Prize has been praised by the UN Secretary-General for creating a pathway to stability in the Horn of Africa region.

Ethiopian Prime Minister Abiy Ahmed was announced the winner of the prestigious award on Friday for his efforts to resolve two decades of conflict with neighbouring Eritrea.

“I have said often that winds of hope are blowing ever stronger across Africa. Prime Minister Abiy Ahmed is one of the main reasons why,” UN chief António Guterres said in a statement.

“His vision helped Ethiopia and Eritrea achieve a historic rapprochement, and I was honored to witness the signing of the peace agreement last year.”

The conflict between Ethiopia and Eritrea began in 1998 over a border dispute. The war lasted two years and costs tens of thousands of lives, though tensions persisted.

The UN Secretary-General described the September 2018 peace agreement between the two nations as a “milestone” which has opened up new opportunities for the region to enjoy security and stability.

He added that Prime Minister Abiy’s leadership “has set a wonderful example for others in and beyond Africa looking to overcome resistance from the past and put people first.”

The UN High Commissioner for Refugees has also congratulated the new Nobel laureate. Filippo Grandi, who heads the UN Refugee Agency, UNHCR, noted that Ethiopia has a long history of welcoming and hosting refugees from across the region.

“By allowing refugees to be better integrated into society, the country is not only upholding its international refugee law obligations, but is a model for other refugee hosting nations around the world,” he said.

Prime Minister Abiy will be among the conveners of the forum taking place in Geneva in December to strengthening commitment to the Global Compact on Refugees signed one year prior.

Countries will be expected to deliver concrete pledges and contributions to support nations and communities which welcome refugees, as well as to enhance refugee self-reliance.

♦ Receive daily updates directly in your inbox - Subscribe here to a topic.
♦ Download the UN News app for your iOS or Android devices.
Nobel Peace Prize|Ethiopia|Eritrea 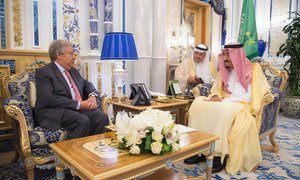