Authorities in Iran must stop the persecution and harassment of religious minorities, a group of independent UN human rights experts said in a statement issued on Monday expressing alarm over the escalation in incidents there.

The experts said they are deeply concerned at the increasing arbitrary arrests and enforced disappearances of members of the Baha’i faith, as well as the destruction or confiscation of their properties, “in what bears all the signs of a policy of systematic persecution”.

🇮🇷 UN experts urge #Iran to stop persecution &amp; harassment of religious #minorities. They call for the immediate and unconditional release of all individuals detained on #religious grounds, and accountability for systematic persecution by authorities.👉 https://t.co/BbG0nXa17R pic.twitter.com/IcQjkWDqhM

These acts were not isolated, they added, but formed part of a broader policy to target any dissenting belief or religious practice, including Christian converts, Gonabadi dervishes and atheists.

“The international community cannot remain silent while Iranian authorities use overbroad and vague national security and espionage charges to silence religious minorities or people with dissenting opinions, remove them from their homes and effectively force them into internal displacement,” their statement said.

The Baha’i community is among the most severely persecuted religious minorities in Iran, according to the experts. The faith was founded in the 19th century by an aristocrat called Baháʼu'lláh, who followers consider a prophet.

The UN experts said this year has seen a marked increase in arrests of Baha’is, as well as targeting. By April, they had received reports that over 1,000 members were awaiting imprisonment, following their initial arrests and hearings.

Since July, security forces have raided the homes of more than 35 Baha’is in various cities across Iran.  Several persons also have been arrested, including three former leaders, who were later charged with “managing the unlawful [Bahá'í] administration”, which carries a 10-year sentence.

One of the leaders, Afif Naimi, was forcibly disappeared for more than a month, until his fate and whereabouts were disclosed.

This month, security and intelligence agents violently demolished at least eight homes belonging to Baha’i families in Mazandaran Province and confiscated 20 hectares of their land. Persons who tried to challenge the operations were arrested.

The experts have previously written to the Iranian authorities about the situation of the Baha’i minority, recalling their February 2021 communication that raised concern over systematic violations of property and housing rights.

They added that more than 90 Baha’i students have been barred from enrolling in universities so far this year.  Last month, the Ministry of Education accused community members of being involved in espionage, propagating Baha’i teachings, and infiltrating educational institutions.

The independent rights experts are seriously concerned that provisions of the Penal Code are being used to prosecute individuals on grounds of religious affiliation and based on allegations that they have expressed views considered critical or derogatory towards Islam.

The experts have also repeatedly raised concerns about the criminalisation of blasphemy under the Penal Code, which carries severe penalties such as life imprisonment and capital punishment, contrary to international human rights law.

“Such state-sanctioned intolerance furthers extremism and violence,” they said.  “We call on the Iranian authorities to de-criminalise blasphemy and take meaningful steps to ensure the right to freedom of religion or belief and freedom of opinion and expression without discrimination.”

Experts receive their mandates from the UN Human Rights Council in Geneva, and work on a voluntary basis.

They are neither UN staff, nor are they paid for their work. 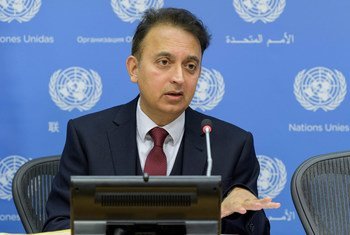 The conviction of an Iranian official by a Swedish court for his part in the mass execution and torture of political prisoners was welcomed on Friday by a top UN-appointed independent rights expert.