Antonio Herrera
A young child at home in rural Colombia.

The violence is having a devastating impact, particularly on women and children, indigenous peoples, Afro-descendants, community leaders and human rights defenders.

Colombia’s new government takes office next month, and the report outlines a series of recommendations that should be implemented urgently to protect lives and uphold the rights of those affected.

The report, which is in Spanish, also calls for security sector reform, citing concerns of human rights violations by State security forces, including “arbitrary deprivations of life”.  Alleged links between some State officials and security forces and violent groups must also be investigated.

“It is the State’s duty to protect the population from violence, and to do so in a manner respecting international human rights law. This is why we are urging the Government to adopt public policies to efficiently respond to and prevent further violence, in compliance with Colombia’s obligations under international human rights law,” said Michelle Bachelet, the UN High Commissioner for Human Rights.

Dismantling the wide array of non-State armed groups and criminal organizations operating in Colombia should be a priority for the government, the report said, together with consolidation of the rule of law and strengthening public institutions in the most affected areas.

The country has witnessed a dramatic drop in violence since the signing of a 2016 peace deal between the authorities and the FARC-EP militia group, which ended a half-century of conflict. Murders declined from 12,665 in 2012 to less than 1,240 in 2016, OHCHR said, citing the Institute of Development and Peace Studies (INDEPAZ),

However, non-State armed groups and criminal organizations - often involved in drug trafficking, illegal mining and other illicit activities - have expanded their presence in various regions over the past two years.

The report said the government’s predominantly military response has failed to halt this expansion, while limited presence of civilian institutions is exacerbating the situation. Lack of education and job opportunities has also increased the risk of children and adolescents to being recruited by non-State armed groups.

Last year, the UN Human Rights Office in Colombia verified the killing of 100 human rights defenders. Additionally, between 1 January and 30 June of this year, the Office received information of 114 killings of activists, with 22 cases verified so far.

The report revealed how armed groups and criminal organisations have adopted a variety of tactics to gain control over communities, including by imposing rules and restrictions on movement.

“We have to do what they tell us…There are checkpoints on the road where men with heavy weapons stop us, tell us we need to ask permission to leave and check our phones,” one human rights defender told the authors.

In some cases, indigenous and Afro-Colombian communities have been forced to take part in illicit activities, and to abandon their traditional ways of life, such as fishing and hunting.

The violence destroys the social fabric of communities, endangering cultural identity and autonomy, the report said. Communities and their leaders who try to protect their land, their lives, their culture and the environment, face huge risks.

An example is the situation of the Nasa indigenous people in Cauca department, located in the southwest, who have long been the target of threats and attacks. Four Nasa leaders were killed in the first few months of this year. The report warned that violence, drug-trafficking and extractive industries are threatening the community’s whole way of life and survival.

Similarly, the current situation could accelerate the disappearance of the Jiw indigenous people, who live along the banks of the River Guaviare and currently number around 2,261.

© UNMVC/Jennifer Moreno
A woman paints a mural for Peace and Reconciliation in Colombia.

The report urges the new administration to ensure the full implementation of the peace agreement, which includes pursuing the voluntary substitution of coca crops, rather than their forced eradication.

Additionally, rural reform and development programmes should be implemented and consolidated, with the participation of affected communities, while the capacity of local governments should be reinforced, which also includes those in Afro-descendant and indigenous communities.

Ms. Bachelet said the incoming government´s focus on peace and the regional implementation of the peace agreement “is a sound approach which my Office supports.”

The UN human rights chief also stressed the importance of dialogue to rebuild trust in the State and its institutions.

“I urge the authorities to hear the voices of all sectors of society,” she said. “The people who live in rural and remote areas have suffered the most from this scourge of violence but are also best placed to help chart a path towards a more peaceful future.” 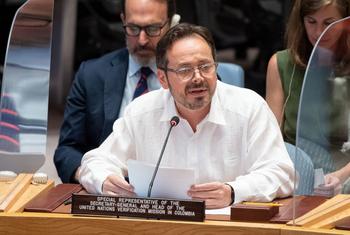 The international community should lend full support to the incoming administration in Colombia, which has a tremendous opportunity to speed up implementation of the landmark 2016 Peace Agreement that ended more than 50 years of civil war, the top UN official in the country told the Security Council on Thursday.