UN-Habitat/Julius Mwelu
The Kenyan capital Nairobi. Voters will go to the polls to elect a new president on 9 August, 2022.

Independent UN human rights experts on Thursday called on authorities and political candidates standing in next month’s general election to foster an enabling civic space to ensure the vote goes ahead peacefully, and prevent violence.

“Civic space, public participation, fundamental freedoms and a violence-free environment are critical to foster inclusive engagement in the electoral process, and the exercise of political rights,” the experts emphasised in a press release from the UN human rights office OHCHR, as the East African nation prepares to go to the polls on 9 August.

Political tensions during the campaign as well as hate speech by candidates and their supporters, have a dangerous potential to ignite flames of violence, said the experts.

They urged all parties to uphold the right to political participation, freedoms of assembly, opinion and expression, and to respect the role of an independent judiciary.

“All those involved in the electoral process must commit themselves to peaceful conduct prior, during and after elections. Candidates and political parties must refrain from using inflammatory language which may lead to violence and human rights abuses, particularly against women, persons with disabilities, LGBTIQ+ individuals or ethnic groups,” they said.

Kenya has a history of contested elections and political violence, marked by human rights violations, including loss of life, as well as sexual and gender-based violence, the experts noted.

In the aftermath of the 2007 ballot, more than 1,000 people were killed and 350,000 displaced in ethnic riots. Both then rival presidential candidates Uhuru Kenyatta and William Ruto were summoned to the International Criminal Court (ICC) to face charges of crimes against humanity. Charges were eventually dropped against Mr. Kenyatta, and Mr. Ruto’s case was dismissed.

“Perpetrators who committed human rights violations during past elections are yet to be held accountable,” the experts noted.

Concerned by the impact of repeated violence during past elections denying the right to political participation - particularly for women candidates and voters – the independent experts urged Kenyan authorities to ensure everyone can participate freely in the electoral process, without discrimination.

At the same time, activists, human rights defenders, election monitors and journalists should be allowed to work without intimidation or reprisals. “They play a crucial role during elections to contribute to a free and inclusive electoral process and the credibility of results,” the experts recalled, welcoming the commitment by authorities to refrain from communications shutdowns during the election period.

The leading candidates are former Prime Minister Raila Odinga who has been endorsed by former rival and current president, Mr. Kenyatta, and Mr. Ruto, who is the current deputy president.

Kenya's election law requires that a presidential candidate win more than 50 percent of the vote for an outright win. This presidential election will be Kenya's third under the constitution established in 2010.

The independent rights experts who issued the statement receive their mandates from the UN Human Rights Council, which is based in Geneva. 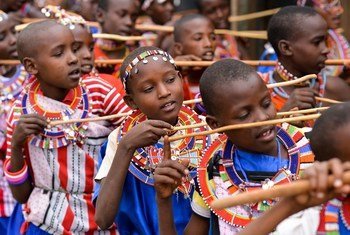 An independent UN human rights expert on Monday hailed a decision by the African Court on Human and People’s Rights, to award reparations to the Ogiek indigenous peoples, for harm that they suffered due to “injustices and discrimination.” 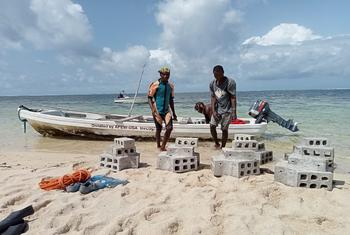 Kenya’s Kuruwitu corals are back, thanks to local conservation drive

A small, quiet village in Kenya has found a new purpose in the fishing industry through a successful marine coral conservation project, the first of its kind in the Marine Protected Areas of the western side of the Indian Ocean.