© UNDP/Oleksandr Ratushniak
Apartment buildings destroyed after shelling in Obolon district, in Kyiv. Thursday's attack on Vinnytsia was far from the current frontlines.

The UN Secretary-General is appalled by the deadly missile attack on Thursday against the city of Vinnytsia in central Ukraine, that reportedly killed at least 22 people, far from the frontline of the main fighting in the east, including three children and wounded more than 100 others, his Spokesperson said in a statement.

Cruise missiles fired from a Russian submarine in the Black Sea struck civilian areas of the city, including an office block and residential buildings, according to media reports, citing Ukrainian authorities.

Dozens of civilians have been killed in Ukraine over the last 24 hours. Multiplying attacks against civilian infrastructure are leaving millions without access to basic services, including water and electricity. Our latest update: https://t.co/OYveokQazr

“The Secretary-General condemns any attacks against civilians or civilian infrastructure and reiterates his call for accountability for such violations,” the statement said.

UN humanitarians report that in the past 24 hours, strikes have resulted in casualties and damaged civilian infrastructure in Zaporizhzhia, Mykolaiv, and in several parts of Donetska region, located in the east.

“In Mariupol, people have limited access to drinking water, with only five litres per person every week, according to Ukrainian authorities,” he said.

The World Health Organization (WHO) has warned of the high risk of cholera in the city, although no cases have been reported so far.

Across Ukraine, nearly 800 settlements have no electricity, and more than 230,000 families, businesses and others, have no gas supplies. The Donetsk region, or oblast, is the worst affected, according to authorities.

UN agencies continue to support people across Ukraine, and those who have fled the country, in the wake of the Russian invasion which began on 24 February. 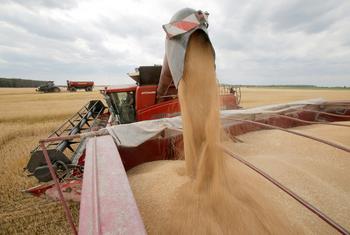