Secretary-General António Guterres said that a “critical step forward” had been taken to allow the “safe and secure export” of millions of tonnes of grain via the Black Sea, but emphasized that no formal agreement has yet been signed between Russia and Ukraine.

.@antonioguterres tells reporters: Today in Istanbul, we have seen a critical step forward to ensuring the safe and secure export of Ukrainian food products through the Black Sea. In a world darkened by global crises, today, at last, we have a ray of hope. pic.twitter.com/0rUohVZxUc

The Government of Türkiye has been working with the UN to broker a deal for weeks, after the Russian invasion of Ukraine on 24 February, saw a major rise in prices of grains, cooking oils, fuel and fertilizer, together with major supply chain issues across the world.

Much of the grain imported by developing countries comes from Ukraine, but since the invasion, the country’s Black Sea ports have been blockaded by Russia, including the crucial hub of Odesa.

“In a world darkened by global crises, today, at last, we have a ray of hope”, said Mr. Guterres, briefing correspondents at UN Headquarters in New York.

The UN chief said that the UN had been represented at the negotiations in Istanbul, by Humanitarian Affairs chief, Martin Griffiths, and Rebeca Grynspan, head of the UN Trade and Development agency, UNCTAD.

“Since the war started, I have been underlining the importance of having Ukraine’s food products and Russian food and fertilizer fully available in world markets”, said the UN chief.

‘An agreement for the world’

“In the end, the aim of all parties is not just an agreement between the Russian Federation and Ukraine, but an agreement for the world.”

He thanked Türkiye for it’s “outstanding efforts” convening the talks and saluted all participants for their work “to secure an agreement for our common humanity.”

“Today is an important and substantive step. A step on the way to a comprehensive agreement. We must also do more for struggling people and developing countries getting pummeled by a food, energy and financial crises not of their making.”

He reminded that the war in Ukraine rages on, but the “hopeful news” from the Istanbul talks, “shows the importance of dialogue.”

Responding to questions from reporters, the Secretary-General said that he hoped the first meeting in Istanbul would lead to another, “very soon”, potentially next week.

Asked about the wider possibility of a peace deal being reached between Russia and Ukraine to end the fighting, Mr. Guterres said there was still a “long way to go”, although Wednesday’s developments were an extremely encouraging sign.

© FAO/Genya Savilov
A truck unloads corn grains at a grain processing factory in Skvyra, Ukraine.
♦ Receive daily updates directly in your inbox - Subscribe here to a topic.
♦ Download the UN News app for your iOS or Android devices.

Russia’s war on Ukraine, an assault on the world’s vulnerable: Guterres 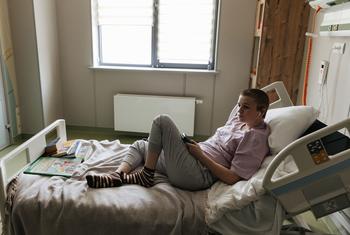 The UN health agency (WHO) issued an urgent appeal on Friday for access to sick and injured people caught up in the war in Ukraine, including “hundreds” of landmine victims, “premature babies, pregnant woman, older people, many of whom have been left behind”. 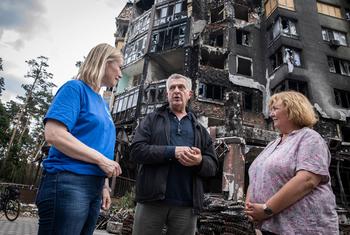