“Civilians continue to pay the highest price” arising from Ukraine’s on-going conflict with separatist rebels in the east, the UN Deputy Emergency Relief Coordinator told the Security Council on Tuesday, a conflict which is still claiming lives.

“More than 3,300 civilians have been killed, and up to 9,000 injured since the conflict began in 2014,” Ursula Mueller, Assistant Secretary-General for Humanitarian Affairs, told Council Members, adding that 1.5 million have been internally displaced.

In 2019, she said, 3.5 million people will need humanitarian assistance and protection services, “many of whom are elderly, women and children”.

“The parties to the conflict must take all feasible precautions to avoid, and in any event minimize, civilian harm” she stressed. “International humanitarian law must be upheld to protect civilians and critical civilian infrastructure, at all times, everywhere and by all parties”.

Ms. Mueller painted a picture along the contact line which divides Government forces from separatist militia, of “shelling, sniper-fire and landmines” constituting “a daily reality for millions.”

“We have not forgotten you. We will continue to do everything we can to alleviate your daily suffering, and to call for lasting peace”, she said, concluding her briefing on the humanitarian situation. 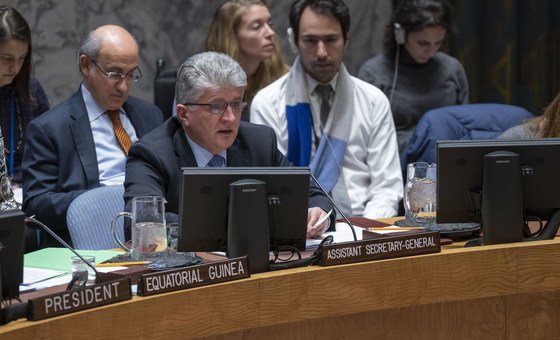 Miroslav Jenca, Assistant Secretary-General for Europe, Central Asia and the Americas for the Departments of Political and Peacebuilding Affairs and Peace Operations, briefs the Security Council on the situation in Ukraine., by UN Photo/Cia Pak

Briefing on the latest moves towards implementing the only “agreed framework” for halting the guns in eastern Ukraine, known as the Minsk Agreements, Miroslav Jenča, Assistant Secretary-General for Political and Peacebuilding Affairs, told the Council that “negotiations appear to have lost momentum, with the main stakeholders either unable and, or unwilling to reach an agreement on the key steps forward or being distracted from focusing on the implementation of agreed steps”.

The February 2015 Minsk Agreements, agreed by the leaders of Russia, Ukraine, France and Germany, set out the necessary steps to restore peace to Eastern Ukraine.

Emphasizing the stalled progress, he called on all parties to “fully implement the Measures, including a much-needed comprehensive and lasting ceasefire”.

As consistently highlighted over the past years, the conflict in eastern Ukraine is “neither dormant, nor frozen” said Mr. Jenča, but it “continues to claim victims”.

Pointing out that another round of discussions will be taking place in the capital of Belarus this week convened by the Trilateral Contact Group – representatives from Ukraine, the Russian Federation, and the Organization for Security and Co-operation in Europe (OSCE) – he spelled out “the UN’s sincere hope and expectation” for tangible outcomes.

“There is an urgent need to agree on the additional measures that would make the ceasefire sustainable and irreversible”, Mr. Jenča emphasized.

He said that the parties’ withdrawal of heavy weapons from populated areas, disengagement of forces and protection of critical civilian infrastructure needed to be a “priority”.

“Over half a million people are living within five kilometres of the contact line and they are the most exposed to periodic shelling, gunfire, landmines and unexploded ordnance” he said, adding that the area around the contact line remains “among the most mine-contaminated areas in the world”.

Noting that the conflict will soon be entering its sixth year, he called it “an active threat to international peace and security”.

“The conflict in Ukraine is first and foremost tragically affecting the Ukrainian people” he said, but it also “continues to test the credibility of international and regional organizations”.

He urged Member States to work together in the interest of regional stability. “We urge all parties to demonstrate the necessary political will to ensure the earliest possible end to the conflict and help bring about peace and stability in all of Ukraine”, concluded Mr. Jenča.

Speaking via video conference from Minsk, Belarus, Martin Sajdik Special Representative of the Chairperson-in-Office of the OSCE cited some positive developments, including water deliveries and infrastructure repairs; and encouraging efforts in maintaining mobile communications, telecommunications, which are “especially vital for the elderly to receive pensions in government-controlled territory”.

♦ Receive daily updates directly in your inbox - Subscribe here to a topic.
♦ Download the UN News app for your iOS or Android devices.
security council|Ukraine 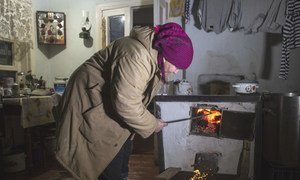 In Ukraine, extreme winter cold is making life harder for thousands of people whose lives have already been torn apart by conflict. Hoping to find safer places to live, families in the region have had to endure a battle for survival, in buildings without heat or electricity.