Mr. Griffiths was addressing the International Donor Conference for Ukraine in Warsaw. Co-hosted by Poland and Sweden, in cooperation with the Presidents of the European Commission and the European Council.

Thank you 🇸🇪@SwedishPM and 🇵🇱@MorawieckiM for hosting todays international donors’ conference in support of 🇺🇦Ukraine in partnership with @vonderleyen and @eucopresident 🇪🇺. @WFPChief spoke about @WFP operations in the country. pic.twitter.com/R72PC5aYsp

The conference raised a reported $6.5 billion.

According to the UN refugee agency, UNHCR, more than 5.7 million people have now fled across Ukraine’s borders seeking shelter, in the two and a half months since the Russian invasion on 24 February.

In a tweet, UN High Commissioner for Refugees, Filippo Grandi, said that in his briefing to the conference, he had stressed priorities for the millions of refugees and internally diplaced, the importance of cash programmes, shelter and accommodation, and protection of the vulnerable.

He also made clear that planning needs to begin now, for their eventual return home, and solutions to make that a reality.

World Food Programme (WFP) chief David Beasley, also addressed the conference, following the announcement yesterday by the UN emergency food relief agency that it had signed a Memorandum of Understanding (MoU) with the Ministry of Social Policy of Ukraine, to scale up cash transfers to half a million people across Ukraine.

The agreement with the Government will support people displaced by the war, and expand the assistance already provided to 170,000 people through cash assistance.

"This partnership will expand our efforts to support the Social Protection system that is already in place in Ukraine,” said Samir Wanmali, WFP Deputy Emergency Coordinator.

Since the beginning of April, WFP has transferred nearly $11 million in local currency, to more than 170,000 people In Vinnytsia, Ivano-Frankivsk, Kharkiv and other cities. Those eligible are receiving between $75 and $225 per month, depending on family size.

Cash allows people to buy the items and services that they consider most important. It is extremely useful to families with a variety of needs in a volatile environment, when they may be moving locations.

Every dollar spent by a family in Ukraine is directly injected into the local economy, said WFP.

UN independent human rights experts together with the Coordinator of the international non-governmental group known as the Global Protection Cluster, issued a statement on Thursday, highlighting the “appalling” humanitarian situation facing millions in Ukraine 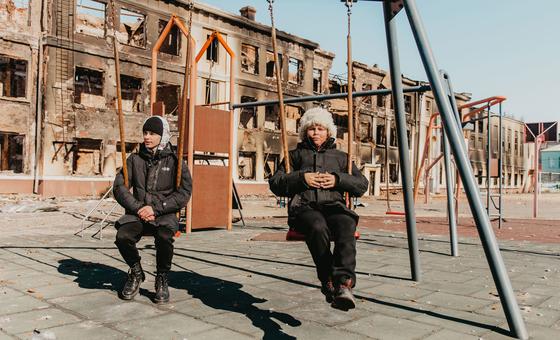 “Multiple forms of gender-based violence are being reported such as sexual exploitation and abuse and sexual violence, including conflict-related sexual violence.  Women and girls on the move - at border crossing points or transit and collective centres and in bomb shelters - experience particularly high insecurity and risk of violence, including trafficking in persons”, they said.

“Numerous families have been separated during displacement, and unaccompanied and separated children are particularly vulnerable to the risks of trafficking, violence, abuse and exploitation.”

The also expressed deep concern over the plight of older people and those with disabilities in the war zone.

“Many of them are still in conflict zones because of mobility limitations or reliance on others for care, and face challenges in accessing bomb shelters or safe areas. We are especially concerned about those persons with disabilities, including children, living in institutions for persons with disabilities who face barriers to access humanitarian assistance and evacuation on an equal basis with others.”

Support to save lives

The independent experts called on the international community and donors to provide sustained and increased support for the response to internal displacement and the Ukraine Flash Appeal, and other critical efforts to protect the human rights of all civilians who remain in Ukraine.

“We reiterate our call for accountability for the horrific crimes already documented and our support for the initiatives established to investigate these allegations.”

UN Special Rapporteurs are independent experts, appointed by the Human Rights Council. They work on a voluntary basis, are not UN staff, and are not paid for their work.