As five million people have already fled Ukraine and another seven million are displaced internally, UN Deputy High Commissioner for Refugees Kelly T. Clements urged the Security Council on Tuesday to ‘put aside’ its divisions and find a way to end the “horrific and senseless war”, now in its eighth week.

Speaking from Hungary, where almost half a million Ukrainians have sought safety, she updated that neighbouring countries are including refugees in national education, health and social programmes.

"While the sheer scale and speed of displacement is immense, we must not lose sight of what these figures mean."Deputy High Commissioner for Refugees @KellyTClements briefing the UN Security Council on Ukraine from Hungary, spelling out the impact of the war on ordinary people. pic.twitter.com/U9irg7hNtx

“This inclusive approach is – bar none – the best way for refugees to sustain their lives in exile, and it requires more international support”.

The UN also estimates that 13 million more are in the hardest hit areas, many unable to move and difficult to safely reach with aid.

Beyond blankets and cash

“No pile of blankets, no sum of cash, no amount of medicine, is going to halt the death and destruction,” the Deputy High Commissioner emphasized.  “While we will continue our job to deliver aid, we need this Council to do its job too.”

Noting that she had just returned from the Czech Republic and Austria, where she described the compassion and solidarity as being unprecedented, Ms. Clements said her visit, which will continue to Slovakia, complements those of High Commissioner Filippo Grandi, including to Ukraine, and Assistant High Commissioner for Operations, Raouf Mazou – who is currently visiting Moldova and Romania.

While the scale and speed of displacement is immense, she urged the Council not to lose sight of what these figures mean.

Ms. Clements shared the story of a 25-year-old woman from Odessa ­– whom she met in Prague – that was compelled to leave her family behind in Ukraine.

“Each one of the millions displaced are forced to make impossible, heart-breaking decisions,” she said.

The senior UN official also recounted “consistently remarkable” acts of humanity that have been seen in messages of support plastered on apartments, windows, and streetlamps as well as individuals rallying to provide what they can.

Moreover, concerned States have kept their borders open, providing protection to those seeking safety and aid.

“We call on that to continue in a non-discriminatory manner for all people in need,” she stated.

These inspiring responses are only surpassed by the strength and composure of refuges themselves, who continue to exude courage and resilience, Ms. Clements pointed out.

Most of all she said, they emphasize their hope for peace so they can return home.

“We will continue to expand our lifesaving aid to the internally displaced throughout Ukraine,” Ms. Clements affirmed, especially in the centre and the east – where a brutal humanitarian nightmare is unfolding.

This requires not just resources, but also safe and unhindered access to people in need, she said.

Director-General of the International Organization for Migration (IOM) Antonio Vitorino warned that the increased targeting of cities will lead to more civilian casualties and displacement, both internal and external.

I just briefed the UN Security Council on the needs of internally displaced persons, those forced to flee their homes to neighboring countries, and all populations affected by the war in #Ukraine.I reiterate @antonioguterres’ urgent call for an immediate humanitarian ceasefire. pic.twitter.com/RQqC7UOlFo

He called on parties to the conflict to uphold their international law obligations to protect noncombatants, their homes and civilian infrastructure.

Highlighting several specific risks faced by internally displaced people, refugees and third-country nationals, Mr. Vitorino warned that in situations of mass displacement, up to 30 per cent of the population will experience some form of negative psychological impact.

He voiced particular concern over the women and children who have fled or been displaced.

Human trafficking was a known phenomenon in the region and past crises have demonstrated that large-scale displacement, family separation and disruption of civil protection and community networks render these individuals vulnerable to violence, exploitation and abuse.

The IOM chief urged all neighbouring and impacted countries to ensure the immediate identification and registration of unaccompanied and separated children fleeing from Ukraine.

Moving forward, Mr. Vitorino called for a better understanding of the intentions of those fleeing; people forced to leave their homes; and individuals who have been separated from their families due to the conflict.

IOM will continue, through its teams on the ground, to collect and disseminate information critical to this effort, targeting actions to improve the well-being of all those affected by the war.

“As more people are likely to be displaced, it is crucial to plan ahead and ensure that all those fleeing the war have access to adequate support and services,” stressed the Director-General. 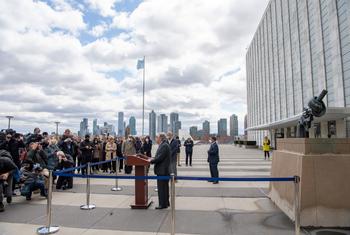 This year, Orthodox Holy Week is being observed under a “cloud of a war” that totally negates the Easter message of unity, the UN chief said on Tuesday, calling for a four-day humanitarian pause in Ukraine. 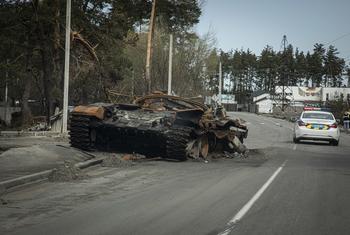 Amidst devastating Russian shelling and attacks on health care facilities and personnel, UN aid agencies said on Tuesday that they continue to mobilize inside Ukraine in an effort to help the country’s most vulnerable people.