© Said Ismagilov
Destruction is shown inside a residental building in Bucha, on the outskirts of Kyiv in Ukraine.

UN Secretary-General António Guterres has again called for an immediate humanitarian ceasefire in Ukraine to allow delivery of life-saving aid as well as evacuations, his spokesperson said on Monday.

The appeal followed attacks on cities across the country– most recently Lviv, Dnipro, Kharkiv and Mykolaiv – which resulted in numerous civilian casualties and destruction.

Give negotiations a chance

“The Secretary-General strongly urges all parties to enact an urgent and immediate humanitarian ceasefire, which will enable the safe and secure functioning of humanitarian corridors, help evacuate civilian residents and also deliver life-saving humanitarian and medical assistance,” said Mr. Dujarric, speaking during his daily briefing at UN Headquarters.

Stressing that “genuine negotiations must be given a chance to succeed and to bring lasting peace”, he said the UN stands ready to support such efforts.

Prior to the briefing, UN relief chief Martin Griffiths told journalists that although humanitarian ceasefires in Ukraine are “not on the horizon right now”, they could be in a couple of weeks.

Mr. Griffiths reported on his visits to Russia and Ukraine earlier this month, where he held discussions with senior officials on UN “aspirations” for humanitarian pauses and on how to improve the notification system that allows safe passage of humanitarian workers and supplies.

“Obviously we have not yet got humanitarian ceasefires in place on the Russian side,” he said. “I went into a lot of details on this, and they continue to promise to get back to me on the details of those proposals.”

Mr. Griffiths will travel to Turkey this week to meet with President Recep Tayyip Erdoğan on hosting humanitarian talks between Russia and Ukraine.

On Sunday, the Secretary-General spoke with President Erdoğan, expressing his ongoing support for the Istanbul process related to the war in Ukraine.  He also underlined the need for humanitarian corridors for aid distribution and evacuations.

Asked about Turkey’s role, Mr. Griffiths said he was impressed by how the country has presented itself to both sides as a “genuinely valuable and useful host” for talks.

“In classical mediation terms, there isn’t a mediation really going on between the Russians and Ukrainians,” he said, “but the Turks come closest to it, I think, of all Member States.”

On the prospects for a ceasefire, Mr. Griffiths pointed to the example of Yemen, where warring sides have implemented a two-month truce.

“Ceasefires, they’re not on the horizon right now. But they may be in a couple of weeks; they may be a little bit longer than that,” he said. “And it will all depend on two things: the war, of course….and the talks.”

© UNOCHA/Saviano Abreu
United Nations Emergency Relief Coordinator and Under Secretary-General for Humanitarian Affairs Martin Griffiths in Irpin, Ukraine on 7 April 2022.
♦ Receive daily updates directly in your inbox - Subscribe here to a topic.
♦ Download the UN News app for your iOS or Android devices. 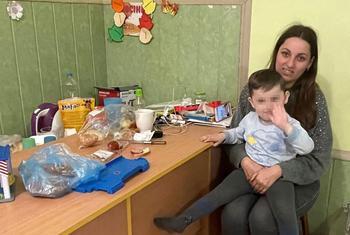 Bucha. Once a quiet dormitory town near Kyiv, it is now synonymous with the mass killing of civilians in the increasingly brutal war in Ukraine. Although Yuliia Ivanenko* and her family escaped the bloodshed, and are receiving help form the UN migration agency (IOM), they are struggling to adapt to their new status as they join the ranks of the millions of people displaced from their homes.