In an impassioned address to the Security Council that evoked the ashen destruction wrought during the Second World War, Ukrainian President Volodymyr Zelenskyy on Tuesday described in stark detail what he said was the deliberate slaughter of civilians in Bucha by Russian forces, laying out an existential choice for its members, over the whole future of the world’s security architecture, founded in 1945.

“We are dealing with a State that is turning the veto of the United Nations Security Council into the right to die”, President Zelynskyy warned.  If it continues, countries will rely not on international law or global institutions to ensure security, but rather, on the power of their own arms.

I regret the divisions that have prevented the Security Council from acting on Ukraine &amp; other threats to peace.Today I urged its member countries to do everything in their power to end the war and mitigate its impact on the people of Ukraine &amp; beyond. pic.twitter.com/HQp9ktkdIe

Noting that he had just returned from Bucha, the newly liberated suburb of Kyiv that has become notorious since images of mass civilian deaths there emerged at the weekend, he recounted how Russian forces had sought and purposely killed anyone who served Ukraine.

He was addressing the Council today, he said, in honour of the deceased:  those shot in the head after being tortured, thrown into wells, crushed by tanks while sitting in their cars, and those whose limbs were cut off and tongues pulled out because the aggressors “did not hear what they wanted to hear”.

He accused Russia of wanting to “turn Ukrainians into silent slaves” and openly stealing everything, “starting with food and ending with gold earrings that are pulled out and covered with blood”.

These tactics, he said, are no different than those used by terrorist group Da’esh - except that they are now being perpetrated by a permanent member of the Security Council.  “Where is the security that the Security Council must guarantee?” he implored.

'The power of peace must dominate'

Recalling that Holocaust organizer Adolf Eichmann did not go unpunished, the Ukrainian president said it was time for reform.  “The power of peace must become dominant”.

He challenged the Council to either remove the Russian Federation as a source of war so it can no longer block decisions made about its own aggression, or simply “dissolve yourselves altogether” if there is nothing to do other than engage in conversation.  “Are you ready to close the United Nations?  Do you think that the time for international law is gone?” he asked.

Bolstering that plea in an earlier briefing to the Council, UN Secretary-General António Guterres, expressed deep regret over divisions that have prevented the Council from acting not only on Ukraine – but on other threats to peace around the world.  He urged the Organization’s flagship security body to do “everything in its power” to end the war.

Under-Secretary-General for Political and Peacebuilding Affairs Rosemary DiCarlo similarly noted that conditions had seriously deteriorated since her 17 March briefing.  The number of Ukrainian civilians killed has more than doubled; Ukrainian cities continue to be mercilessly pounded, often indiscriminately, by heavy artillery and aerial bombardments; and hundreds of thousands of people remain trapped in encircled areas under nightmarish conditions.

“The devastation wrought on Mariupol and other Ukrainian cities is one of the shameful hallmarks of this senseless war,” she said.

She called on Kyiv and Moscow to quickly translate any progress in their ongoing negotiations into action on the ground, emphasizing that indiscriminate attacks are prohibited under international humanitarian law and may amount to war crimes.

“The massive destruction of civilian objects and the high number of civilian casualties, strongly indicate that the fundamental principles of distinction, proportionality and precaution have not been sufficiently adhered to,” she stressed.

Addressing the Council from Geneva, Emergency Relief Coordinator Martin Griffiths, said that over a quarter of Ukraine’s population has fled.

“Perilous conditions are hampering our efforts to access civilians - or for them to access us,” he stressed.

In one sign of progress, he announced that in the past day, another convoy was dispatched from the humanitarian coordination hub in Dnipro to Sievierodonetsk -  in the far east – with food, winter clothing, non-food items, medicine and hygiene kits offloaded to the Ukraine Red Cross today.

‘A long road ahead’

The Emergency Relief Coordinator also described “long and frank” exchanges with Minister for Foreign Affairs Sergey Lavrov and his Deputy, Sergey Vershinin, on 4 April, and separately with the Deputy Minister for Defence, with whom he shared suggestions for mutually agreed upon military freezes to allow for evacuations of civilians and for the safe passage of aid.

He said he came away from these meetings believing that “we have a long road ahead of us - but it must be travelled, and we will travel it”.  On 7 April, he intends to travel to Ukraine to lead discussions with senior Government officials on these same issues.

In the ensuing debate, United States Ambassador Linda Thomas-Greenfield said that behind the images of bombed out buildings, many people had “stuffed their lives into backpacks” and left the only home they had ever known.

She gave her own account of the refugee crisis in parts of Europe, having returned on 4 April from the Republic of Moldova and Romania.

Based on available information, she said the United States has assessed that Russian forces committed war crimes in Ukraine.  The United States is seeking suspension of the Russian Federation from the Human Rights Council, as Moscow uses its membership as a platform for its propaganda, she said.

UN Photo/Manuel Elías
The Russian Ambassador Vassily Nebenzia, during the Security Council meeting on the situation in Ukraine

Russian Ambassador Vassily Nebenzia countered that in fact his country had saved 123,500 people in Mariupol, without any help from Ukraine.  Over 600,000 people have been evacuated to Russian territory since its “special operation” began.  “We’re not talking about coercion or abduction”, he clarified.  These voluntary decisions are supported by videos on social media, he said.

To Ukraine’s President, he said: “We place on your conscience the ungrounded accusations against the Russian military,” which are uncorroborated by eye-witnesses.

He said any hopes tied to the President’s election had failed to materialize following his launch of a linguistic inquisition against Russian speakers in the Donbas region. “We were on the verge of correcting injustices” sparked by the 2014 events at Maidan, he recalled.

In reply to accusations against Russian forces criminality in Bucha, he blamed Kyiv and the Western media for promoting “flagrant inconsistencies” and said that there are, in fact, recordings of Ukrainian radicals shooting civilians.

Moreover, he said, the corpses seen in a graphic video presented to the Council by President Zelenskyy “in no way” resemble those who reportedly had been on the ground for four days.  He implored Ukraine’s President to recognize that his country is only a pawn in the geopolitical game against the Russian Federation.

From the European perspective, said Olof Skoog, head of the European Union delegation - which numbers most of the nations taking in millions of refugees fleeing Ukraine - Russia’s war of aggression jeopardizes the rules-based order, as well as European and global security.

He described images from Bucha as a “stain on our common humanity”, and demanded that Moscow immediately stop its military aggression, unconditionally withdraw all forces from Ukraine and fully respect its territorial integrity, sovereignty and independence within its internationally recognized borders. 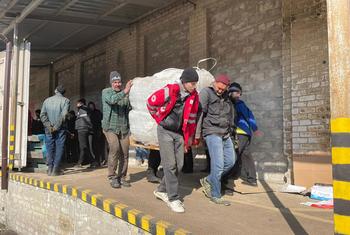 An eight truck convoy of life-saving humanitarian aid provided by the UN and humanitarian partners reached Sievierodonetsk on Tuesday, in eastern Ukraine’s Luhansk region, where sustained and intense fighting is taking an enormous toll on civilians. 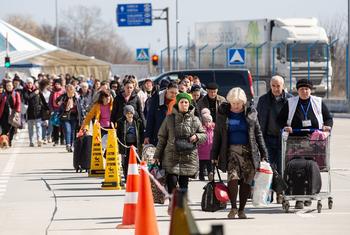 UN chief António Guterres on Tuesday added his voice to the growing international calls for a war crimes investigation into the killing of civilians in the Ukrainian town of Bucha.