The peace process in Yemen has been “stalled for too long,” the top UN envoy for the country told a summit meeting on Wednesday in Riyadh, Saudi Arabia, aiming to build on the Saudi-led coalition’s unilateral declaration of a ceasefire, ahead of the holy month of Ramadan.

According to news reports, Houthi rebels, who have been battling the coalition in support of the internationally-recognized Government, since 2015, refused to take part in the talks, given the summit venue.

In addition to calling for the talks to be held in a neutral country, the Houthis (formally known as Ansar Allah) wanted the coalition to allow the re-opening of Sanaa’s airport and lift restrictions on the country’s ports.

UN Envoy for #Yemen at @GCCSG: "For over two months, I have been engaging with the parties to reach a truce by the beginning of Ramadan &amp; we are making progress. The truce proposal includes easing of fuel crisis &amp; facilitation of the freedom of movement.” https://t.co/JuJzQI1jH8 pic.twitter.com/oVGRSobFBv

He welcomed “all diplomatic initiatives” supporting the UN’s efforts to resume an intra-Yemeni political process and “bring an end to the suffering” caused by the conflict.

Yemenis from different sides of the conflict have not engaged in face-to-face discussions for a comprehensive political solution since 2016, in Kuwait.

And over the years, the harm caused by the war has continued to accumulate.

Mr. Grundberg painted a picture of state institutions eroding, citizens living without basic services and Yemenis suffering from severe restrictions on their movements.

The war has killed, injured and displaced civilians and decimated the national economy, he said.

“The younger generation is being deprived of its future. The worsening economic and humanitarian conditions have a disproportionate impact on women, children and marginalized groups”.

The longer the conflict goes on, the more severe the impact, and the more difficult it will be to reverse the damage.

To help the Yemeni people chart “a clear path” out of the crisis, the UN envoy is developing a Framework that outlines “a multitrack process,” covering economic, military and political priorities as well as an inclusive political settlement.

“Earlier this month, I launched a series of structured consultations to identify the short- and the longer-term priorities for this multitrack process,” he said, adding that he was “encouraged by the enthusiastic participation” of Yemeni political parties, components, experts and civil society representatives during the process.

Across the plurality of voices, a common message emerged: Yemenis want the war to end and a just and durable peace to prevail.

Mr. Grundberg relayed that the parties all wanted “an immediate end to hostilities, and measures to mitigate the impact of the conflict on civilians”.

Moreover, they welcomed his Office’s launch of an economic track to address widespread humanitarian suffering and economic conditions.

“I will resume my consultations in the coming weeks, and I hope representatives of all major Yemeni groups will participate,” he stated.

In parallel to consultations and conflict escalation, the UN official spotlighted a positive development.

“Yemen needs a truce,” he asserted, informing the participants that for over two months he has been engaging the parties “with a sense of urgency” to reach an agreement, ahead of Ramadan.

The peace proposal includes easing the fuel crisis and facilitating freedom of movement – bringing some immediate relief to Yemenis, especially during the holy month of fasting.

Commenting on the Saudi-led coalition’s temporary ceasefire, Mr. Grundberg said that “the recent unilateral announcements by the parties on temporary halts to military operations are a step in the right direction”.

He expressed his hope that throughout the GCC meetings, which will continue until 7 April, “solutions can be found” to some of the dire economic challenges facing Yemenis and for improvements in State institutions.

“Yemen needs more support, including from its GCC neighbours, to improve basic services, including access to electricity, ensure security and stabilize the economy,” he said.

And he supported discussions to help increase momentum toward bringing the Yemeni parties back to the negotiating table under UN auspices.

In closing, Mr. Grundberg shared his desire for discussions to convey “a genuine sense of urgency” on the need for dialogue, compromise and commitment to a peaceful solution to the conflict as well as for a future in which Yemenis can “coexist with equal citizenship” and begin the process of national reconciliation.

He wished for a future of accountable governance, state institutions that serve citizens equitably and a place where Yemenis’ human rights are respected, and social and economic justice ensured.

“By working in concert, the international community can help bring Yemen closer to such a peaceful future,” concluded the UN Special Envoy. 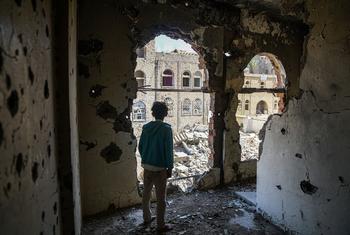 Recent escalation of the conflict in Yemen drew strong condemnation from Secretary-General António Guterres on Saturday. 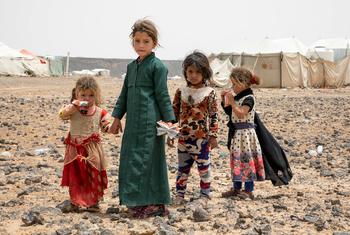