Secretary-General António Guterres on Tuesday night condemned recent terrorist attacks in Israel that have claimed the lives of at least 11 Israeli citizens.

“Such acts of violence can never be justified and must be condemned by all,” he said in a statement issued through his Spokesperson.

Tuesday’s terrorist assault on the street in Bnei Brak, a small ultra-Orthodox city on the eastern outskirts of Tel Aviv, was the third such attack in Israel in a week.

Secretary-General @antonioguterres condemns the recent terrorist attacks in Israel, which claimed the lives of at least 11 Israeli citizens. In the spirit of the upcoming religious holy days, he calls for an immediate end to violence: https://t.co/1sZWz28I4r

Amateur video broadcast on Israeli TV stations showed a man dressed in black brandishing a rifle. According to news reports, the Palestinian gunman was a resident of Ya’bad, in the northern West Bank, who was believed to have been working at a local building site.

He was later shot dead by Israeli police, but not before fatally wounding one of the officers who confronted him.

The attack marked one of the bloodiest weeks in Israel in recent years, ahead of the Muslim holy month of Ramadan, beginning next weekend.

Two previous attacks just days earlier, saw an Israeli Arab drive his car into a cyclist, killing him. The attacker, who reportedly had planned to join terrorist group ISIL - then stabbed three people to death outside a shopping centre.

Five days later, two Israeli Arabs killed two police officers in Hadera, after opening fire on them at a bus stop. ISIL reportedly said that it was behind the assault.

“In the spirit of the upcoming religious holy days, the Secretary-General calls for an immediate end to violence, which only serves to undermine the prospects for peace,” the Spokesperson’s statement said.

The UN chief also extended his “heartfelt condolences” to the families of the victims and wishes a prompt recovery to those injured.

UN media seminar on peace in the Middle East, highlights ‘power of words over weapons’ 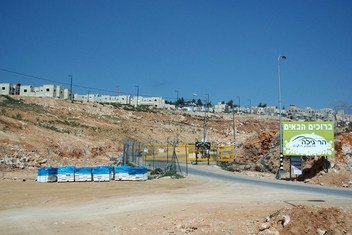 Speakers in the Security Council on Tuesday denounced evictions and demolitions by Israeli authorities of Palestinian-owned properties, as the Special Coordinator for the Middle East Peace Process, Tor Wennesland, expressed regret that “little progress” has made by the sides in upholding obligations under the Council’s landmark resolution 2334.