“The war has caused one of the fastest large-scale displacements of children since World War Two,” said UNICEF chief Catherine Russell.

This includes more than 1.8 million who have crossed into neighbouring countries as refugees and 2.5 million who are now internally displaced.

One month of war has displaced half of Ukraine's children.As families leave everything they know behind, UNICEF is supporting children with mental health and protection services.#ForEveryChild, peace. pic.twitter.com/y5NtbHp6QX

According to UN human rights office, OHCHR, 78 children have been killed, and 105 have been injured in Ukraine since the war began on 24 February.

But these figures represent only those casualties that the UN has been able to confirm – with the true toll likely far higher.

“This is a grim milestone that could have lasting consequences for generations to come”, Ms. Russell warned.

The war has also devastated civilian infrastructure and limited access to basic services.

Over the last four weeks, the World Health Organisation (WHO) has reported 52 attacks that have impacted health care facilities across the country and Ukraine’s Education and Science Ministry has reported damage to more than 500 educational facilities.

“Essential infrastructure on which children depend, including hospitals, schools and buildings sheltering civilians, must never come under attack,” the top UNICEF official declared.

“Children’s safety, wellbeing and access to essential services are all under threat from non-stop, horrific violence,” she said.

Urgent need for peace and protection

According to the International Organization for Migration (IOM), one in three internally displaced people suffers from a chronic condition – aggravating the health of those with non-communicable diseases.

And as inoculation rates plummet, including for measles and polio, outbreaks of these vaccine-preventable diseases may also increase.

“In just a few weeks, the war has wrought such devastation for Ukraine’s children,” Ms. Russell added.

“Children urgently need peace and protection. They need their rights”, she continued, appealing for an immediate cease-fire and greater protection of children.

UNICEF and partners are working hard to get humanitarian assistance to children in Ukraine and neighbouring countries.

It has delivered medical supplies to 49 hospitals in nine regions of Ukraine – including Kyiv, Kharkiv, Dnipro and Lviv – improving healthcare access for 400,000 mothers, newborns and children.

While the UN agency continues to distribute water and hygiene items in communities under siege it is also increasing the number of mobile child protection teams inside acute conflict zones.

In the coming weeks, UNICEF will start emergency cash transfers to the most vulnerable families and establish child friendly spaces in key locations across the country.

© UNICEF/John Stanmeyer VII Photo
A young Ukrainian girl rests with her dog after arriving in Medyka, Poland, with her family.

To support the millions of families who have fled Ukraine, UNICEF and the UN refugee agency, UNHCR, have partnered with governments and civil society organizations to create so-called “Blue Dots,” safe spaces along border crossings for children and families.

They provide key information to traveling families; help identify unaccompanied and separated children; ensure the protection of those travelling on their own; and offer a hub for essential services – as the threat from child and sex trafficking gangs increases.

‘Blue Dots’ have been established in countries hosting Ukrainian children and women and will be scaled up, including to more than 20 in Poland alone.

As 7.5 million children still in Ukraine remain at risk, UNICEF said it was working around the clock there, and providing psychosocial support and protection services.

As long as the conflict continues, the UN Office on Drugs on Crime (UNODC) pointed out that those fleeing are at risk of being targeted by criminal networks.

“Evidence from conflicts shows that criminals profit from the chaos and desperation of war,” said UNODC Executive Director, Ghada Waly.

“Crisis increases vulnerabilities as well as opportunities to exploit people in need, especially internally displaced people and refugees,” she added.

Citing UNHCR figures that indicate that around 90 per cent of the more than 3.6 million Ukrainian refugees are women and children, the senior UN official warned that they are “particularly at risk of human trafficking and exploitation.”

“The longer a conflict lasts, the more vulnerable they can become as they struggle to start a new life,” Ms. Waly spelled out.

Human trafficking from Ukraine, is a well-established, illegal industry with criminal networks operating between Ukraine and countries in Europe and Central Asia.

“People escaping conflict are in a very dangerous and precarious situation”, said Ilias Chatzis, Chief of the UNODC Section on Human Trafficking and Migrant Smuggling, “especially since most of the women leaving Ukraine are travelling without other adult family members, and some children are even travelling alone.”

“They can be more easily deceived by phoney travel arrangements and fake job offers that lead them into exploitative situations. Traffickers are known to use such methods, as well as violence, to trick and coerce their victim”.

In a development later in the day, the Director General of the international atomic energy watchdog IAEA, Rafael Mariano Grossi, said that Ukraine informed the agency that Russian forces were shelling Ukrainian checkpoints in the city of Slavutych, "where many people working at the nearby Chornobyl Nuclear Power Plant live, putting them at risk and preventing further rotation of personnel to and from the site."

Ukraine’s regulatory authority said the shelling was endangering “the homes and families of those operational personnel that ensure the nuclear and radiation safety” of the Chernobyl plant, under the control of Russian forces since 24 February. Slavutych is located outside the Exclusion Zone that was established around the plant, after the 1986 accident.

Mr. Grossi expressed concern about this development, which comes just a few days after technical staff at Chernobyl, were finally able to rotate and go to their homes in Slavutych and rest after working for nearly four weeks without a change of shift, and he said the IAEA would continue to closely monitor the situation. Staff now working at the site, also come from Slavutych.

Earlier today, the regulator also informed the IAEA that it does not expect wildfires burning in the area around Chernobyl, to cause any significant radiological concern, a day after the country’s regulator said Ukrainian firefighters were trying to extinguish blazes in the area. 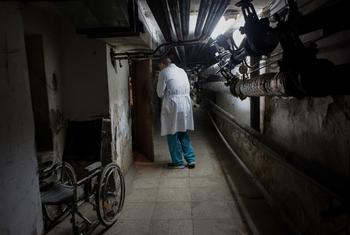 Russia’s war on Ukraine, an assault on the world’s vulnerable: Guterres

The war in Ukraine is not only a “horror unfolding before our eyes”, but also an “assault on some of the most vulnerable people and countries” across the world, said the UN chief on Wednesday, convening the first meeting of the steering committee which will guide the creation of a new UN crisis response group to help mitigate the worldwide impact of Russia’s invasion. 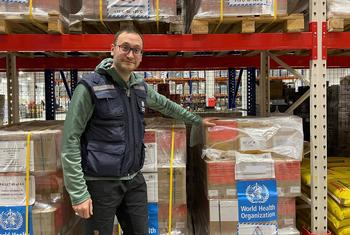 Jarno Habicht has worked with WHO for the last 19 years and served as WHO Representative in Ukraine since 2018. He explains how WHO prepared for armed conflict in the country, and how it has responded to health-related issues since the Russian invasion.