This year’s International Day of Peace has been marked by the release of new stamps featuring music icon and peace campaigner, John Lennon, by the UN Postal Administration (UNPA), as the UN General Assembly High Level Week gets underway.

It’s a reminder that as K-pop sensation BTS take UNGA76 by storm with their message of hope and youthful idealism for a better world, it’s a cause that many of their musical forebears have championed in the past.

Observed globally each year on 21 September, the Day is devoted to strengthening the ideals of peace, both within and among, all nations and peoples.

The souvenir issue includes the lyrics of John Lennon’s classic anthem to world peace, “Imagine”, together with his signature, and three different photo portraits of the former Beatle from the later stages of his life.

This year also marks the 50th Anniversary of the recording of “Imagine”, which is considered the most successful single of Lennon’s solo career.

The song has been performed at some of the world’s biggest events, including concerts for peace, hunger, New Year celebrations, and the Olympic Games - always a hopeful message during troubling times.

Its lyrics encourage us to put aside all differences and unify to imagine a world of peace, without greed, hunger, or barriers separating people and nations, UNPA noted.

The International Day of Peace was created in 1981 to underscore that all people have the right to live in peace.

People are being encouraged to best honour the occasion, said UNPA, by “standing up against acts of hate, and by spreading compassion, kindness, and hope so the world can “live as one”, just as Lennon’s iconic song imagined.

The stamps and souvenir sheets feature photographs by Bob Gruen, Iain Macmillan and David Nutter and the stamps were illustrated by Martin Mörck based on the photographs.

The stamp issue was designed by the UN’s Rorie Katz. A surcharge has been added to the stamps to help fund UN peacekeeping operations worldwide.

Peace is at risk and violated in many places, but ‘we will not give up,’ says UN chief Guterres 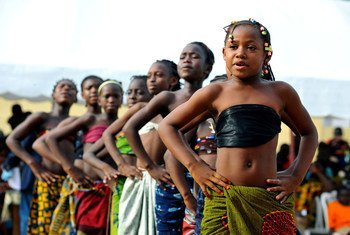 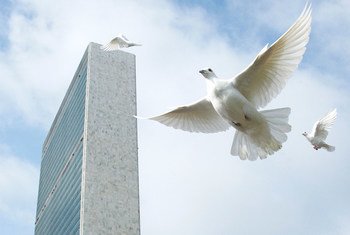 Counting down to Peace Day, UN chief urges: Stand up against hatred and care for planet

Every year on 21 September, the United Nations invites people around the world to celebrate peace by observing 24 hours of ceasefire and non-violence. On Sunday, the UN chief kicked off the 100-day countdown to the International Day of Peace.