UN Photo/Evan Schneider
Some world leaders will deliver speeches in the UN General Assembly hall in person, but it's expected the majority will not be travelling to New York.

The format of this year’s UN General Assembly session (UNGA76) is a reflection of the current state of the world: a gradual return to in-person meetings, with plenty of delegates staying online, but also a desire to return to some version of normality, leavened by a recognition that the COVID-19 pandemic is far from over.

Following last year’s virtual UNGA, some Heads of State will be coming to UN Headquarters in New York to deliver their set-piece General Debate speeches at the podium, whilst the majority stay at home to deliver their messages via video.

One of the most valuable aspects of UNGA for Heads of State and other senior government officials, is the chance to have informal, one-on-one meetings with their counterparts, away from prying eyes. This opportunity was sorely missed last year, and private “bilateral booths” have been set up.
While it is still unclear which government leaders will turn up in person you can, of course, follow our coverage of the debate on the main UN News website, and watch the proceedings live as ever, on UN Web TV.

2 A K-Pop moment, and a vaccine booster

© UNICEF/Zoe Mangwinda
The supply of COVID-19 vaccines to developing countries like the Democratic Republic of the Congo (pictured), needs to be stepped up, according to the UN.

On the subject of COVID-19 vaccinations, the mantra of the World Health Organization (WHO) has been “no-one’s safe until everyone’s safe”: in other words, richer countries, which are making great strides in inoculating the majority of their citizens, need to ensure that the populations of poorer countries are also protected.

However, this is clearly not happening, according to Tedros Adhanom Ghebreyesus, the head of the WHO. On 20 September, as part of the “SDG Moment” of the Decade of Action (the UN’s push to deliver sustainable solutions to the world’s biggest challenges), he will discuss the current state of the global roll-out of vaccinations, with Achim Steiner, the head of the UN Development Programme (UNDP), and Vera Songwe, who runs the UN Economic Commission for Africa (ECA).

Will BTS break the internet? Again?

The all-day event will also feature a performance by Korean superstars, and friends of the UN, BTS.
The seven-piece K-Pop group has been partnering with the UN Children’s Fund (UNICEF) since 2017 on the Love Myself campaign to end bullying, and promote self-esteem.

The I.T. team at the UN will doubtless be on tenterhooks as 20 September approaches, mindful of the huge internet traffic BTS attracted during their previous visit to the General Assembly in 2018, and when their video message was released at last year’s virtual GA - both of which left the system struggling to cope.

The last year has seen a fresh impetus at the UN on the need to overhaul food systems, defined as everything involved in getting healthy and nutritious meals, from crops to meat, onto our plates.

This new push was instigated by the decision of UN chief António Guterres to create the first UN Food Systems Summit, which takes place on 23 September.

Several experts have warned that the current global food system is actively harmful to the planet and global population. Announcing the summit, Mr. Guterres said that food systems are “one of the main reasons we are failing to stay within our planet’s ecological boundaries”.

Food systems emit around a third of global greenhouse gases; cause deforestation and cause around 80 per cent of biodiversity loss.

On top of the environmental destruction, shockingly, around a third of all food produced each year is lost or wasted.
The aim of the summit is to develop strategies to combat global challenges such as hunger, climate change, poverty and inequality; and create new food systems that benefit all people and protect the planet.

NOOR/Kadir van Lohuizen
In Seychelles, efforts are undertaken to improve coastal protection from flooding caused by storms and a rise in sea level due to climate change.

The climate crisis is now recognized as an issue that is not just an environmental problem, but an existential crisis that affects us all: the UN has described climate change as a “threat multiplier”, which is adding stress to the economic, social, and political systems of every country.

For example, drought in the Sahel region of North Africa is a contributing factor in conflict, displacing populations facing hunger and limited livelihood prospects.
Studies have linked climate change to the Sudanese civil war, as well as more recent events such as the war in Tigray, northern Ethiopia, and the growth of armed conflict in the Lake Chad basin, a water source shared by several countries, which has shrunk by some 90 per cent since 1960.

UN News will report on a special Security Council debate on climate and security, due to take place on 23 September.

Questions surrounding energy are at the heart of efforts to tackle the climate crisis, so it may be surprising that the last global gathering on energy held under the auspices of the UN General Assembly, took place 40 years ago.

So, it’s high time for a new one, The UN High-level Dialogue on Energy on 24 September. It’s taking place in a world that views the use of fossil fuels and renewable energy, very differently than it did in the 1980s.

Another challenge due to be discussed at the event will be how to bring harmful greenhouse gas emissions, the drivers of climate change, down to net zero by 2050.

It’s a big task, requiring ambitious actions starting right now. This is why nations, regions, businesses, NGOs and others will be asked to present “Energy Compacts”, setting out voluntary commitments and concrete plans explaining how they’re going to make it happen.

Look out for a LIVE UN News blog of the event, taking in contributions from activists, senior officials, and leaders. 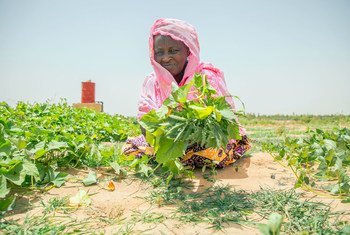 The UN chief António Guterres set out a new plan to transform the world’s food systems on Monday - coinciding with the start of World Food Week - which will culminate in a major summit, scheduled to take place in September next year. 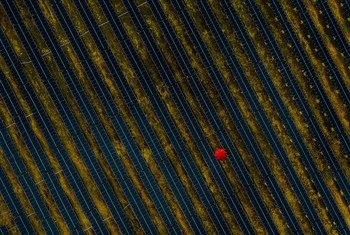