UN Photo/Hien Macline
Schoolgirls in Côte d'Ivoire perform as part of activities to raise awareness about peace and human rights.

“You are leaders, changemakers and advocates in our societies”, he told assembled youth online, “speaking out against violence, discrimination and inequalities” and calling for an end to conflicts worldwide, while also “leading the charge for urgent action on climate”.

Secretary-General António Guterres was attending the virtual 2021 Youth Observance, on the theme of Recovering Better for a Sustainable and Equitable World.

Join us in celebrating peace by standing up against hate amid #COVID19.Watch live as @antonioguterres, UN Messengers of Peace Midori, @PauloCoelho, Jane Goodall (@JaneGoodallInst) &amp; students from around the world commemorate next week's #PeaceDay.https://t.co/Gtycz3bIhb

Mr. Guterres asked young people to support the UN’s call for a global 24-hour ceasefire, “and for all parties to conflict to commit to a lasting, sustainable peace”.

He also urged youth to “keep pushing governments and other leaders to close the vaccine gap between rich and poor countries”.

And finally, to keep sounding the alarm on the climate emergency engulfing our planet.

“As we seek peace among and within nations, we need to seek peace with our planet, too”, he said. “Extreme weather, melting glaciers, rising sea levels, and polluted air and water threaten our very existence”.

In closing he asked for young people to help the world “recover better and stronger”.

“Thank you for celebrating peace with us today, and every day. I count on your continued support as we work together to build a more equitable and sustainable world for all”, concluded the UN chief.

Dyuthi Vasupal, from the UAE, noted the negative repercussions that COVID has had for education, especially for girls, and asked how school systems can bridge the many challenges still being faced, and help young people with “the means, access and opportunities”, to create an equitable society.

Mr. Guterres answered that because education is “the most important equalizer” in the world, it must be a priority for all governments and international organizations and that schools must be able to “adapt, to be able to change and be successful in a world that is in constant progress”.

UN Messengers of Peace took the floor, including celebrated Japanese American violinist Midori, and students from the Chamber Music Institute performed a stirring rendition of Vivaldi’s “Spring” from the Four Seasons.

Award-winning Brazilian author Paulo Coelho emphasized that “respect is the most important thing that we have”. In an upbeat assessment, he acknowledged that while the world “cannot change overnight…little by little” it will get back on track.

British conservationist and ground-anthropologist, Jane Goodall, said that in a world full of conflict and suffering, young people are her “greatest hope”.

“They understand that nature is suffering, that we must find ways to protect forests and other ecosystems…to ban wildlife trafficking…reduce the unsustainable lifestyles of the wealthy and alleviate”, she said.

Ms. Goodall maintained that when millions of people make even small ethical choices in how they live every day, this cumulatively moves us towards a better world.

“We are all part of one human family…We need to get together and take action now, before it’s too late”, she added.

In a broader message marking the International Day of Peace, Mr. Guterres warned that humankind faces “a stark choice between peace and perpetual peril”, saying “we must choose peace”.

He painted a grim picture of COVID-19 turning the world “upside-down” and conflicts “spinning out of control” amidst a worsening climate emergency and deepening inequality and poverty.

The UN chief upheld however, that the world can tackle these issues “by working in solidarity for a lasting, sustainable peace every day”.

“We need peace to level the playing field and reduce inequalities…to renew trust in one another — and faith in facts and science – and we need to make peace with nature to heal our planet, build a green economy, and achieve our net-zero targets”, he spelled out.

The Secretary-General said that “peace is not a naïve dream” but “a light in the darkness”, guiding us to “the only pathway to a better future for humanity”.

“Let’s walk the pathway of peace as if our lives depended on it. Because they do”, he added.

Speaking at the annual Peace Bell ceremony, rung each year by the Secretary-General to pray for World Peace, Mr. Guterres urged everyone to “recommit to each other…and to the best of humanity”.

The newly installed President of the General Assembly, Abdulla Shahid, observed that the “human need for sanctuary is in our genes”.

“Peace is, after all, one of our very reasons for being here. It is a pillar of the Charter, it is why we talk, why we deliberate, why we come together each year”, he said.

Mr. Shahid upheld that everyone can be “instruments of peace”, to change the world into “one of cooperation and constancy” and vowed to work hard to “bring together the best of humanity…[and] showcase the best examples of peace, harmony and prosperity”.

“Together, we are nations united in greater purpose”, he stated.

The General Assembly established the International Day of Peace in 1981. Two decades later, in 2001, it unanimously voted to designate the Day as a period of non-violence and cease-fire.

UN Photo/Manuel Elías
UN Secretary-General António Guterres rings the UN Peace Bell Ceremony on the 40th Anniversary of the International Day of Peace
♦ Receive daily updates directly in your inbox - Subscribe here to a topic.
♦ Download the UN News app for your iOS or Android devices.

The Peace Bell up close 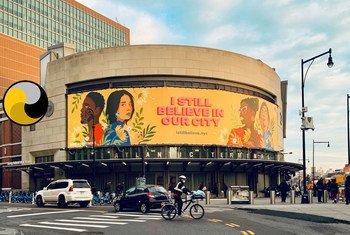 An illustration of resilience and hope, in the face of anti-Asian hate

The rise in hate crimes against people of Asian and Pacific Island heritage in the United States since the beginning of the COVID-19 pandemic, inspired artist Amanda Phingbodhipakkiya to produce vibrant artworks featuring people of Asian heritage. Displayed in public spaces around New York City, the images, and the messages they convey, have made headlines around the world.