IMF/Joaquin Sarmiento
Inside a metro station in Medellin, Colombia.

A new platform launched on Wednesday by the Pan American Health Organization (PAHO) will ease severe COVID-19 vaccine shortages and safeguard more people in Latin America and the Caribbean by producing inoculations within the region.

PAHO Director Carissa F. Etienne announced the launch of the Regional Platform to Advance the Manufacturing of COVID-19 Vaccines and other Health Technologies in the Americas, describing as an initiative that will “coordinate across sectors – health, science and technology and industry – to strengthen their capacity to produce new technologies”.

The UN official explained the need for the platform, saying, “limited [global] production and unequal distribution of vaccines in the face of staggering demand hinder our COVID response”.

More than a third of countries in our region have yet to vaccinate 💉 20% of their populations 👴🏽👩🏿‍🦱👨🏻👩🏽➡️ And in some places, coverage is much lower. @DirOPSPAHO #COVID19

So far, only about 23 per cent of people in the region have been fully vaccinated, and in many countries, coverage is much lower.

The platform will support collaboration across States and agencies, applying existing regional biomanufacturing capacity to produce COVID-19 jabs as well as other medical technologies.

The principle is that manufacture should benefit the entire region, with regional pharmaceutical production and vaccine distribution to all countries by PAHO’s Revolving Fund.

During a recent virtual meeting, Dr. Etienne invited public and private manufacturers to submit expressions of interest in producing the materials for an mRNA vaccine, which is in highly effective in combating COVID-19.

“Mass vaccination is critical if we are to stem the tide of this pandemic and hinder the spread of further variants”, said Dr. Etienne.

“Without urgent action to boost the supply of COVID-19 vaccines, the world will not be able to bring the pandemic under control”, said Anabel González, Deputy Director-General of the World Trade Organization (WTO), highlighting the contribution of regional vaccine production.

She added that “regional diversification of production” could play an important role in increasing supply.

Dr. Etienne focused on the need to “build the infrastructure and technical capacity to break the cycle of dependency on a highly concentrated global vaccine market” as well as “concrete initiatives” to bring mRNA technology to the region.

“But most of all, we have noted the need for coordination, collaboration, investment, and solidarity”, she said. “We believe [they] will be the essential ingredients for the development and production of new medical technologies in Latin America and the Caribbean”.

An earlier invitation to public and private manufacturers interested in the transfer of mRNA technology into the region has resulted in 30 submitted proposals, for which PAHO is in the process of reviewing.

Decisions are expected in September.

Other participants at the meeting included Andrés Couve, Chile’s Minister of Science, Technology, Knowledge, and Innovation; María Apólito, Argentina’s Undersecretary for the Knowledge Economy; Nísia Trindade Lima, President of Brazil’s Oswaldo Cruz Foundation; Soumya Swaminathan, Chief Scientist for WHO; and Alberto Arenas, Chief of the Social Development Division of the Economic Commission for Latin America and the Caribbean. 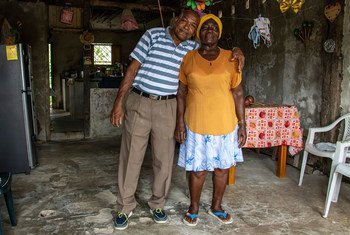 The COVID-19 pandemic is worsening the already difficult situation of older refugees across Latin America, according to a joint assessment published on Wednesday by the UN refugee agency, UNHCR, and the NGO HelpAge International.